PSL kicks off today in karachi 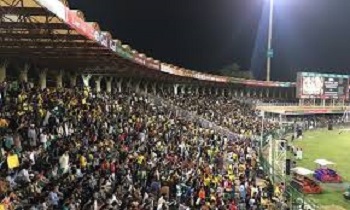 KARACHI: Quetta Gladiators and two-time champions Islamabad United ready to play at Karachi’s National Stadium on Thursday and kick off the first HBL Pakistan Super League event to be staged entirely at home.

And even before the first ball is delivered, the curtains were lifted on Wednesday when squash legend Jahangir Khan entered the stadium with the redesigned, glittering trophy during its unveiling ceremony.

The fifth edition is undoubtedly the biggest cricketing gala to have been staged in Pakistan in decades and a source of satisfaction in the wake of visits by Sri Lanka and Bangladesh this season.

The PSL will be the biggest draw in the country for the next four weeks. Karachi, Lahore, Rawalpindi and Multan will share 34 matches featuring the six franchise-based teams. The remaining four sides are the 2017 winners Peshawar Zalmi, Karachi Kings, Lahore Qalandars and Multan Sultans.

The first edition of the tournament was held in the United Arab Emirates in February 2016. The event featured five teams, Multan Sultans having entered the fray only in 2018.

The League has grown in stature with the induction of top overseas cricketers like Kumar Sangakkara, Chris Gayle, Kevin Pietersen, Brendon McCullum, Shane Watson, Dwayne Bravo and Sunil Narine. They team up with Pakistan’s own galaxy of stars and a rich crop of emerging talent.

A number of overseas players have been impressed by the bowling skills on display at PSL and reckon it among the toughest leagues around the globe. They cite it as the springboard for the return of top-flight international cricket to Pakistan.

Unlike the previous four editions when the whole tournament or a major chunk of it took place in front of half-empty stadiums, the Pakistan Cricket Board (PCB) are hoping for bumper crowds to fill up not just the National Stadium but also the Gaddafi Stadium, the Pindi Cricket Stadium and the Multan Cricket Stadium, particularly for the home games of Karachi Kings, Lahore Qalandars and Multan Sultans.

Peshawar Zalmi are arguably the most popular franchise among them all. They have a big following wherever they go because of the brand of cricket they play. There is a great camaraderie in the Zalmi ranks and Darren Sammy has been easily the most identifiable foreign player. He has played in all four editions.

Peshawar Zalmi, who have played three straight finals from 2017 to 2019, but subsequently lost the last two among them — against Islamabad United and Quetta Gladiators, respectively — are once again are serious contenders for the title alongside the other two PSL champions. The arrival of Tom Banton, the young England batsman who is rated very highly in the shortest format, and Liam Livingstone has considerably strengthened an already formidable line-up.

Quetta too are rated among the hot favourites, especially after Jason Roy confirmed his availability for the entire duration of the league. On the bowling front the reigning champions have Pakistan’s emerging pace sensation Naseem Shah to lead the attack.

Islamabad, on the other hand, have always been a major force and by far the most successful side with two trophies in the first three seasons. This time they have named young Shadab as the skipper while Pakistan’s head coach-cum-chief selector Misbah-ul-Haq has assumed coaching responsibilities on a full-time basis. The main foreign attractions are Dawid Malan, Colin Munro, Luke Ronchi, who was named Player of the Tournament in 2018, Colin Ingram and the experienced South African pace ace Dale Steyn. He has yet to join the squad due to international commitments.

Also in the squad is Sharjeel Khan, the former Pakistan opener who now seeks redemption after serving a spot-fixing ban.

Karachi Kings have never progressed beyond the playoffs, but the appointment of Dean Jones as head coach and with world No1 T20 batsman Babar Azam in the line-up, they can look forward to a strong showing. Alex Hales, Cameron Delport, Chris Jordan, Mitchell McClenaghan and the Pakistan-born US paceman Ali Khan are the team’s major overseas signings.

After four last-place finishes, Lahore Qalandars are in desperate need of a revival under Sohail Akhtar, their seventh captain. They would definitely seek inspiration from Lahore crowds to avoid further humiliation.

Multan Sultans have chosen Shan Masood to lead them while the former Pakistan star Shahid Afridi is a member of the squad.

There is no doubt the PSL has become a platform for youngsters to showcase their prowess. Sharing the dressing room with legends like Sir Vivian Richards and listening intently to words of wisdom from one of the greatest batsmen of the last century has been part of the grooming process. Shadab Khan and Hasan Ali are two examples of how the tournament has polished a bunch of promising but inexperienced hands into international stars.