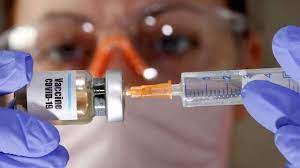 LAHORE: The Punjab government has decided to set up district task forces to be headed by deputy commissioners to effectively implement the strategy for speeding up corona vaccination across the province.

The each task force will include the district police officer, chief executive officer of district health authority and representatives of the NCOC and Provincial Disaster Management Authority as members. Similar task forces would also be formed at the tehsil level.

Addressing the meeting, Dr Yasmin said that all possible steps are being taken to speed up vaccination in the province. She said that mobile vaccination teams would also be formed to meet the target set by the NCOC for daily vaccination.

The provincial minister also issued instructions to the deputy commissioners of Lodhran, Hafizabad, Layyah, Muzaffargarh and Kasur to expedite the vaccination process in their respective areas.

Secretary Primary Health Sara Aslam told the meeting that more than 167,000 people were vaccinated in the province. She said that the NCOC has set a target for Punjab province to have the capacity to vaccinate 420,000 people daily by the end of June.

Home Department officials informed the meeting that markets, bus stands, restaurants and marriage halls are being inspected for implementation of SOPs in the province and 29 restaurants were sealed for violations.

The Chief Secretary Punjab said that the economic conditions cannot afford repeated lockdowns and the eradication of the pandemic is possible only through vaccination. He said that the rate of positive cases is also lower in the districts where more people have been inoculated. He directed that an awareness campaign be launched about the importance and usefulness of getting vaccinated.

Chief Secretary directed the deputy commissioners to ensure availability of adequate quantity of vaccine and best arrangements at all the vaccination centres for the convenience of the citizens. He said that as per the guidelines of NCOC, in order to increase the capacity of daily vaccination, the health department would set targets for each district in terms of population. The performance of concerned officials would be reviewed regularly and explanation would be sought from the officers of the district that fails to meet the target.