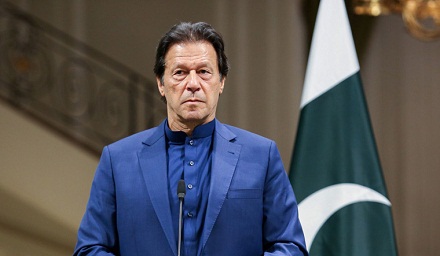 ISLAMABAD: Prime Minister Imran Khan on Sunday announced that he planned to set up a multi-purpose Rehmatullil Aalamin Authority (RAA) with the main aim “to explain Islam to the world” and for propagation of the teachings of Prophet Muhammad (peace be upon him) among the children and youth of the country.

Addressing a conference to mark the beginning of 10-day Eid Miladun Nabi celebrations, the prime minister said he himself would be the patron of the proposed authority.

During his 55-minute scholarly speech in which he shared his personal experiences of living in England as a young student and then as a cricketer, Mr Khan made a comparison between the western and Pakistani cultures by highlighting both the positive and negative aspects of the two societies.

“For how long the government can fight corruption alone? But a society can fight it because it is the society’s money which is stolen,” Mr Khan said. Giving the examples of China, the United Kingdom and Singapore, he said these societies did not tolerate corruption at all.

In an apparent reference to supreme leader of the Pakistan Muslim League-Nawaz (PML-N) and three-time prime minister Nawaz Sharif, Mr Khan said: “A man is delivering speeches while sitting in London after looting the public money. When his people will shower flowers on him, then who will consider theft a bad thing. If the society will not fight, then how many corrupts can a government catch?”

Mr Khan said the divorce rate in society had risen to an alarming level, adding that he could say on the basis of his personal experience that divorce had a very adverse and painful impact on children who wanted to live together with the parents.

“I have seen what destruction is caused by divorce. I have the children. We had divorce. There is no bigger curse than divorce,” he went on saying while speaking to a serious audience comprising his ministers and some of the members belonging to minorities.

He regretted that it was after seeing the growing incidents of children expelling their old parents from home that the government had to bring a legislation to stop this trend.

The prime minister then urged media to play its role in this regard. “We cannot stop the expansion of media, social media and technology, but we should engage our youth and tell them about the Islamic values and the two choices they have.”

He said a cartoon series would be launched to create awareness among children regarding the national ethos and culture.

According to the prime minister, obscenity is the second biggest problem the country has been facing after corruption. He regretted that whenever they talked about obscenity a so-called liberal group started making a hue and cry, saying they were taking the society to the old ages.

The prime minister said that after coming to power, he was told by an inspector general of police that “sex crimes”, including rape and child abuse cases, were increasing in the country. He said the DIG of the area presented a “horrible picture” of the situation about sex crimes in Kasur district of Punjab.

Mr Khan blamed Hollywood and Bollywood for the spread of obscenity in society and regretted that there was no role of scholars in the country to tell the youth about the negative impacts and consequences of these evils. He said the victims of rape and child abuse did not pursue their cases out of shame for themselves and their families.

“What action can the government take against them [rapists]?” he asked while quoting an incident in which a woman refused to report her rape. “It is the society which fight corruption. Law alone cannot fight it. Similarly, it is the society which will have to fight the growing sex crime. It is up to the society to make a decision.”

The prime minister was of the view that obscenity was an ill in society and was having a bad and disastrous impact on social and family life. He urged the religious scholars to play their role in stopping obscenity and saving “our family system” through their research work. He said the concept of “veil” had been given by the religion to save the family system.

Presenting salient features of the proposed Rehmatullil Aalamin Authority, the prime minister said they had started search for a competent scholar to head the authority which would comprise top professional Muslim scholars from across the world. The RAA, he said, would monitor the effectiveness of Seeratun Nabi material, which was recently added to the schools’ curriculum. It will also forward recommendations and add teachings of other religions that preach humanity and inclusivity so that “non-Muslims can also get acquainted with the true spirit of their respective religions”, he added.

The RAA members will also monitor main and social media in order to provide alternative content ideas and programming, especially for kids and youth, besides projecting a positive and true image of Islam to outside the world.

The RAA will encourage and facilitate research at universities on the ‘Golden Age of Islam’ and the various aspects surrounding the leadership and highest moral standings of the Islamic leaders at the time. “Khalid Bin Waleed was perhaps the greatest general in the world history who had never lost a war. But [Caliph] Hazrat Umar (RA) told him to leave the command as he was to appoint someone else as commander,” Mr Khan said while highlighting leadership qualities even of the companions of the Holy Prophet.