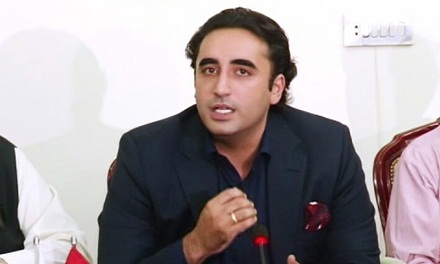 MUZAFFARABAD: Pakistan Peoples Party (PPP) chairman Bilawal Bhutto-Zardari on Sunday said that right to self-determination was the only viable solution to the lingering Kashmir issue which was why his party had been laying stress on the UN-sponsored plebiscite in the disputed Himalayan region.

Speaking at big gatherings in four towns of Kotli and Poonch districts, he reiterated his accusations of “compromise on Kashmir” by Prime Minister Imran Khan.

“We have seen the sell-out of Kashmir at his hands… Instead of Kashmir, he has turned out to be the ambassador and advocate of [Indian spy] Kulbhushan Jadhav… And as it’s not enough he now wants to roll back the country’s nuclear programme,” he alleged in his speeches.

Terming India’s Aug 5, 2019, move a “historical onslaught”, Mr Bhutto-Zardari said that in its response, Mr Khan had “drawn a change in the country’s map in addition to a few other impotent measures”.

“This is the reason that every single child in Kashmir, the opposition in parliament and we are raising slogans that the sell-out of Kashmir is unacceptable.”

The PPP chairman said that the Kashmiris were the people of honour and dignity and they could not leave their struggling brethren in occupied Kashmir alone.

“Imran Niazi can stay silent [on Kashmir] but Kashmiris won’t,” he remarked.

He expressed the hope that people would elect all PPP nominees for installation of a ‘jiyala prime minister’ so that the decisions on Kashmir were taken in Kashmir by the Kashmiris themselves and not by Bani Gala.

“On July 25, people of Azad Kashmir will give a message to the whole world that they are not with any puppet, but with democracy and its synonym, the PPP.”

“We want to see a prime minister in [Azad] Kashmir who is not a puppet, does not make any mistake on Kashmir and who can dare both Modi and Niazi,” he said, adding that the PPP would not just guarantee [grant of] the rights of the AJK but would also become the support of Kashmiri brethren in India-occupied territory.

Mr Bhutto-Zardari asserted that the PPP was the only party in Pakistan that had not compromised with Indian Prime Minister Narendra Modi.

“It’s on record that none of our leadership has ever met Modi, let alone shaken hands with him. We treat him as our enemy just like he is of the Kashmiris,” he said.

Alluding to the PML-N leadership with a smile, he said: “Neither do we invite him at our place in celebrations nor do we join him in his hours of grief.”