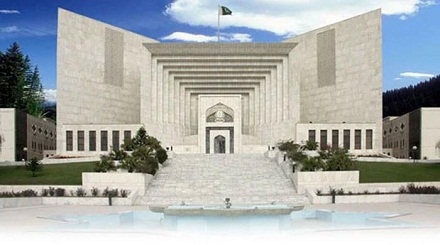 ISLAMABAD: The Supreme Court on Tuesday issued a contempt notice to a the Pakistan Peoples Party member Masoodur Rehman for his disrespectful outburst against Chief Justice of Pakistan Gulzar Ahmed and ordered the inspector general of Sindh to ensure the offender’s appearance before the court at the next hearing.

The directives were issued during a contempt of court hearing by the Supreme Court on a video clip showing highly objectionable and inappropriate utterances of Masoodur Rehman against the chief justice.

In its order, the apex court said it had come to its notice that Abbasi had delivered a speech in which he made indecent and disrespectful remarks about the CJP. “On the face of it, it appears to be derogatory and scandalous. Prima facie the court considers such blatant remarks made by the PPP local leader to constitute the contempt of court under the Constitution and the law,” the order said.

“Accordingly, let a show cause notice be issued to him under Article 204 of the Constitution, read with Section 3 of the Contempt of Court Ordinance, 2003 to file his reply why he may not be proceeded against and punished in accordance with the law,” the order said.

Section 3 of the Contempt of Court Ordinance 2003 reads: “Whoever disobeys or disregards any order, direction or process of a court, which he is legally bound to obey, or commits a willful breach of a valid undertaking given to a court, or does anything which is intended to or tends to bring the authority or a court or the administration of law into disrespect or disrepute or to interfere with or obstruct or interrupt or prejudice the process of law or the due course of any judicial proceedings or to lower the authority of a court or scandalise a judge in relation to his office or to disturb the order or decorum of a court, is said to commit contempt of court.”

The SC order required the Sindh IG to ensure service of such notice on Masoodur Rehman and make certain his appearance before the court at the next hearing on Monday (June 28). Pemra and FIA are required to furnish all relevant record, data and information in respect of the speech made by the PPP leader.

The Supreme Court also issued notice to Attorney General Khalid Jawed Khan in terms of Order XXVII-A CPC to assist the court in the matter.

On Monday, the Executive Committee of the Supreme Court Bar Association (SCBA) had at a meeting demanded stern action against what it called false accusations made in the video clip and also called upon the federal government and its associated law enforcement agencies to arrest Masoodur Rehman and put him behind bars so that he could be made an example for the public at large in such a manner that no one dares to repeat this vulgarism ever against judges.

The SCBA also reiterated its commitment that it would not allow any insult to the honour and dignity of judges. “Let anyone not be mistaken to disrespect and question the dignity and independence of judges, the judiciary, or the institution in the wake of ulterior moves to defame judges with false and malicious accusations,” it added.

The SCBA also demanded necessary steps at the earliest to remove the video clip from social media and to take other steps for safety and security of judges and their families. The association, while condemning the inappropriate, nonsensical and foul language used against the CJP under the banner of the Pakistan Peoples Party, said indeed it was very unfortunate that such obnoxious remarks had been passed by an uncouth person who prefers to be a public representative.