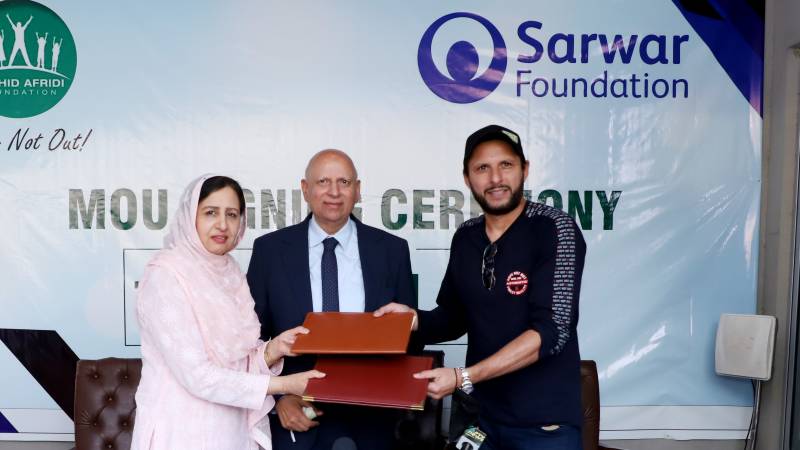 Punjab Governor Chaudhry Sarwar congratulated Shahid Afridi and Begum Perveen Sarwar on signing the MoU on health, education and provision of clean drinking water to the people, adding that he was hopeful that the joint efforts of these two organisations would be very beneficial for the underprivileged sections of the population.

Governor Punjab said that he has been working for the provision of clean drinking water and for the amelioration of health and education sectors for twenty years but ever since he assumed the office of Governor, his wife Perveen Sarwar had been overseeing all the affairs of Sarwar Foundation and he was very pleased to say that she was managing everything in a better manner than him.

Chairman of Shahid Afridi Foundation, Shahid Khan Afridi said: "It is a pleasure for me to work with Sarwar Foundation for welfare projects in Punjab and other cities of Pakistan."

He said that Punjab Governor Chaudhry Mohammad Sarwar and his wife Begum Perveen Sarwar are serving humanity in a way that is commendable. He said that together with the Sarwar Foundation, we will work in the sectors of healthcare, clean drinking water, education, and eradication of hepatitis.

While appraising the media of his Foundation work, he said that under the Shahid Afridi Foundation, 14 schools have been established in Lahore and other cities of the country in which 4000 students are getting free education, while Sahibzada Fazlur Rehman charity Hospital has been set up in Kohat to provide free healthcare facilities to the people that have benefited over 170,000 people so far.

Afridi said that Shahid Afridi Foundation is also working for the provision of clean drinking water and more than 150,000 people are getting safe drinking water and now, together with Sarwar Foundation, we will continue to help those in need, adding that free Hepatitis Camps will be set as part of Hepatitis eradication campaign.

The Chairperson of Sarwar Foundation and wife of Governor Punjab, Begum Perveen Sarwar said that apart from organising free medical camps and free hepatitis screening camps, we will also collaborate with Shahid Afridi Foundation in the education sector and clean drinking water initiative.

Begum Perveen Sarwar said that Sarwar Foundation has the honour of largest welfare organisation to provide clean drinking water to 2.5 million people on a daily basis. She further said that more than 50,000 people have been screened so far during the Free Hepatitis Campaign and all those who needed treatment are being given free medicines and at present we have 2 hospitals in Chichawatni and Rajana and a school in Pir Mahal and more welfare projects are in the pipeline.