Shehbaz Sharif invited all stakeholders for revival of economy 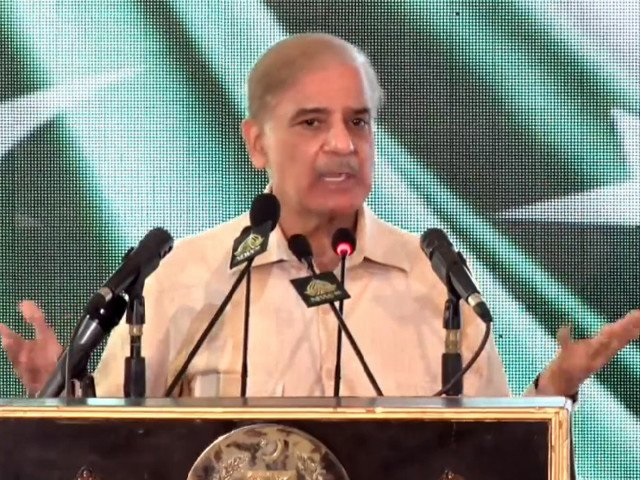 ISLAMABAD: Prime Minister Shehbaz Sharif on Tuesday invited all stakeholders to put their heads together to cement a long-term plan to revive the ailing economy so that no future government could compromise on important national issues.

“Let us sign a ‘Charter of Economy’ for economic stability and progress and seal it so that whosoever will come to power cannot change basic goals,” the prime minister told a day-long pre-budget business conference, stressing that the country’s economy could not be streamlined without political stability.

The prime minister promised that the suggestions floated in the conference would be considered and separate plans would be made for agricultural, industrial and financial growth.

He said it’s about time the elite class had to make sacrifices and non-productive assets like real estate would have to be taxed. “Until now, hard time has been faced by the poor but today it’s the turn of well-off people to take the burden,” he added.

The prime minister also suggested that the real estate sector should be taxed and vertical housing should be encouraged to save as much land as possible.

Bold decisions were the need of the hour and imperative for the country’s bright future, he said and noted that building large dams was one such decision.

The premier urged industrialists to go for renewable energy and capitalise on the country’s huge reserves of coal for power generation.

Unlike the previous government, he said, the current administration wanted to keep cordial relations with all friendly countries.

The prime minister also stressed the need for curtailing imports and increasing exports, assuring participants of the government’s all-out support in expanding the local industry and removing all hindrances and red tape.

Earlier, Finance Minister Miftah Ismail said the government was determined to present a progressive budget, with a special focus on fiscal consolidation to bring down the budget deficit below five per cent of GDP.

Addressing the conference, the minister said an effective strategy had evolved to achieve economic growth of up to 6pc and control inflation with strategic measures.

The minister said the current government had re-engaged Saudi Arabia, China, the United Arab Emirates and other friendly countries, and it would hopefully help improve the situation in the country.

He said the government had inherited the economy in a bad situation, as the country witnessed the third-highest inflation rate after Argentina and Turkey.

During the four years of the PTI government, some 20 million people went below the poverty line and 600,000 lost their jobs, he said.

He said the incumbent government was faced with a projected deficit of around Rs5.6 trillion when it came to power and was making concerted efforts to bring it down to Rs5.2tr.

He said the average debt taken by the previous government stood at Rs5.18tr, whereas the PML-N government had taken Rs2.132tr, which was utilised for building power plants and other infrastructure.

The total debt taken by 19 prime ministers during the last 70 years was Rs24.952tr, whereas the PTI government took around Rs20tr, which was around 80pc of the total debt acquired since the country’s independence.

He said the country’s 80pc manufacturing was meant for local consumption, and only 20pc was for exports, which was comparatively too low. “High imports are not the main problem, but the main problem is that our exports are very low.”

The minister said Pakistan imported 3.5m tonnes of edible oil every year, which, if its prices are maintained at the current level, would cost Pakistan at $7bn in the next fiscal year.

The minister said that around Rs1.072tr power subsidy was given during the current year, whereas the circular debt went up to Rs500 billion, taking the total power sector losses to Rs1.6tr.

He said the petroleum sector was also given Rs81bn subsidy while it had a circular debt of around 400bn. Likewise, the Sui Northern Gas Pipelines Ltd was facing losses of Rs200bn and the Pakistan State Oil of Rs500bn.

The country needed $41bn in the next 12 months, he said, adding that he was “very confident” about it happening.

“We have to pay back $21bn in the next year. I am guessing that the outside limit of the current account deficit will be $12bn [...] I think that we should have reserves of at least three months [...] So we need $41bn over the next 12 months and I think it will happen,” he said.

Mr Ismail said the government re-engaged the International Monetary Fund (IMF) and expressed the hope that the agreement would be signed soon.

On back-to-back petrol price hikes within a week, he said the government had to do it under compulsion, as otherwise, it would have to incur a loss of Rs120bn per month.