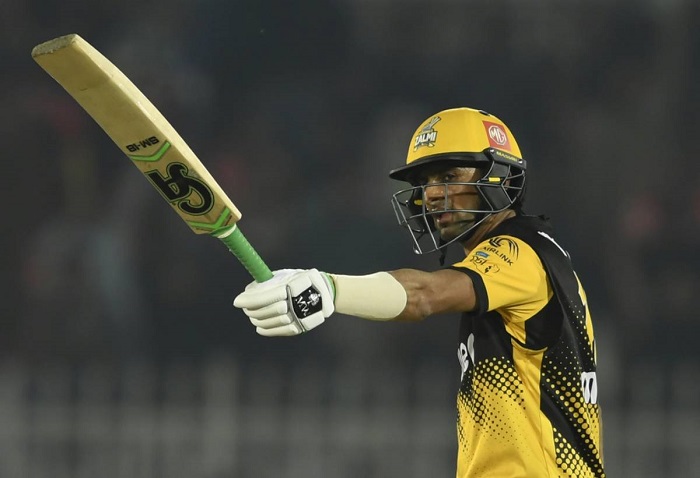 KARACHI: The experience of more than two decades was on display when Peshawar Zalmi’s stand-in captain Shoaib Malik, after arriving at the crease right after the powerplay, took it right till the end.

The 39-year-old, however, decided to assume to supporting role, while allowed all-rounder Hussain Talat to play the protagonist in Zalmi’s seven wicket victory in their HBL Pakistan Super League opener over Quetta Gladiators at the National Stadium here on Friday.

The left-hander, with his impact, snatched the limelight off young English opener Will Smeed, who smashed 97 off 62, helping the Gladiators to post 191-4 in the first innings.

Talat, who is playing his first season for a side other than Islamabad United, added 52 off 29 to the total before falling to Australian medium-pacer bowler James Faulkner in the 17th over. From that point Zalmi needed 33 off 19 balls.

It did take some patience, with pacer Naseem Shah conceding only six in the next over. What followed was the Malik show. A lesson in finishing.

As Faulkner returned to bowl the 19th over, Malik’s third partner for the night, West Indies’ Sherfane Rutherford, lifted the left-hander’s second ball magnificently over the off-side for a boundary.

The last three balls of the over saw Malik club Faulkner for two sixes and a four, leaving only four runs for Zalmi to win the match in the last over.

Naseem hoped against hope when he sent Rutherford back to the pavilion on the second ball for 10 off 9 as he played it down the throat of Mohammad Nawaz at long-on.

But a double and a single is all Malik had to take with non-striker Ben Cutting to end a masterclass of an innings and complete a character transformation from the supporting actor to the actual hero of the three-time finalists’ strong start to the seventh edition of the PSL.

The veteran contributed to 48 off 32 balls, smashing one four and four sixes. Talat managed five boundaries and two maximums in a well-crafted innings. The duo collaborated for an 81-run partnership off 51 balls for the fourth wicket.

Had it not been for a good start to the chase by Zalmi openers Tom-Kohler Cadmore and 19-year old Yasir Khan, it might not have been easy for skipper Malik to make an impact with Talat.

Yasir, who came in for veteran wicket-keeper/batter Kamran Akmal — isolating after testing positive test for Covid-19 — smashed a quickfire 30 off 12 balls, plundering four fours and two sixes. Kohler-Cadmore contributed 22 off 16 (three fours and one six).

Both departed after helping Zalmi post 62-2 by the end of the powerplay, which was exactly what Quetta had posted at the same stage. Pakistan international Haider Ali, who came in at three could, however, only add 19 off 21 before Malik and Talat combined.

The night, by the end of Quetta’s innings, had looked like it belonged to Smeed, a 20-year-old from Cambridge. On his PSL debut, the opener played through the innings, only falling off on the last ball, just three shy of what could have been a historic century.

He hit 11 fours and four sixes as Zalmi missed the experience of skipper Wahab Riaz in their bowling ranks. The left-armer is isolating too. Another veteran Sohail Khan and Sameen Gul took care of Zalmi’s pacer department.

Both failed miserably, with Sohail conceding 51 and Sameen leaking 41 runs in their designated four overs. The latter managed to bag two wickets though. The pick of the bowlers for Zalmi was leg-spinner Usman Qadir, who finished with figures of 2-20 in four overs.

Quetta’s second highest run-scorer was Sialkot-born Ahsan Ali who smashed 73 off 46, smashing eight fours and two sixes. He and Smeed set up a 155 run partnership for the Gladiators, for whom the partnership went in vain.