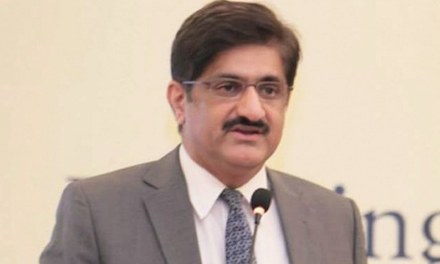 KARACHI: On Saturday The Provincial Task Force on coronavirus, decided to continue with the ongoing restrictions for the next two weeks with strict standard operating procedures (SOPs) across the province,keeping in view the rising trend of new cases and increasing death rate.

The meeting was told that a record number (24,299) tests were conducted on May 21 against which 2,136 cases were diagnosed to be positive, constituting 8.8 per cent detection rate, and 22 patients died on May 21 alone which was a dangerous trend.

It was disclosed that 17,197 travelers landed at Jinnah Terminal from May 5 to 21 and their rapid antigen tests were conducted there and then, as a result 38 or 0.22 percent of them came positive.

Reviewing the post Eidul Fitr scenario, it was revealed that on Eid day (May 13), there were 1,232 cases which went on abnormally increasing to 2,136 on May 21.

At this the chief minister said that it meant 904 cases increased within eight days since Eid.

The meeting was told that during the last seven days, from May 15 to 21, the number of cases in Karachi East had shown a 27 per cent detection rate, South 15 per cent, Central 13 per cent, Korangi, and West and Malir 10 per cent.

During the said week Hyderabad and Dadu showed 11 per cent detection rate.

At this the chief minister said that there were 154 deaths in April and during three weeks of 232 deaths were reported. “It means the situation is worsening,” he added.Keeping in view the serious situation of the cases and growing number of deaths, the chief minister decided to continue the ongoing restrictions for next two weeks and review it again on June 6/7. He also decided that all the recreational places, including Seaview, Hawkesbay, amusement parks etc, would remain closed, however walking tracks in the parks would remain open only for walking/jogging purposes.