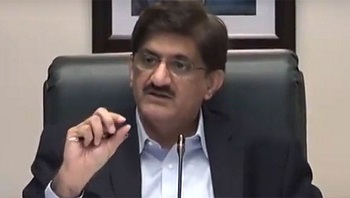 KARACHI: Sindh Chief Minister Syed Murad Ali Shah, has decided to provide daily wagers and other deserving persons with financial assistance or ration so as to meet their basic necessities of life.

In this connection, the CM on Tuesday chaired a meeting of welfare oragnisations to work out a joint plan to support daily wagers and other deserving persons who have lost their bread-earning resources during the lockdown.

The meeting was attended by Faisal Edhi of the Edhi Foundation, Ramzan Chippa, Shehzad Roy of Zindagi Trust, Shakil Dehlvi of Alamgir Trust, Zafar Abbas of the JDC Foundation, Sousif Lakhani of Saylani Welfare, Qazi Sadaruddin of the Al-Khidmat Foundation, Hanif Motlani of the Memon Federation and others.

The chief minister said that he was worried about the daily wagers and for those who earned their bread and butter by setting up makeshift food stalls, such as for selling burgers, fries and chana chat. “I want to support them for which a mechanism needs to be evolved,” he said.

Shah discussed a mechanism for the distribution of ration and disbursement of funds among the needy people after involving the head of each and every welfare organisation. Most of the charity organisers said that the people should be provided with ration for 15 days. Some of the participants were of the view that the distribution of ration was quite a difficult job and people swarmed around vehicles carrying the ration.

Some of the participants advised the chief minister to distribute cash among the deserving people so that they could purchase their groceries etc. as per their requirements. The Zakat department has already had a mechanism to distribute a guzara allowance among 200,000 deserving persons.

Shah constituted a four member-committee headed by Energy Minister Imtiaz Shaikh. He said that he had called back Imtiaz Shaikh from Shikarpur to support him in the war against COVID-19. The other members of the committee are special assistants to CM Waqar Mehdi and Rashid Rabbani and CM’s coordinator on social sector Haris Gazdar.

The committee in consultation with welfare organisations would take final decision on how to assist the affected people whether with ration or with cash or both.

The government has already formed an appl on which people in need of ration would be able to send messages to get emergency support. A four-digit helpline number would be also advertised for the information of the people to enable them to contact and get emergency help.

The chief minister directed committee chairman Imtiaz Shaikh to finalise his recommendations within the next two days so that the public could be supported in the shortest possible time.