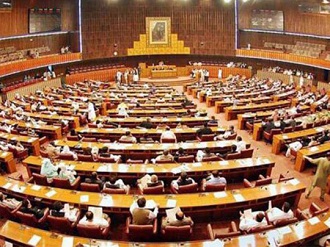 ISLAMABAD: The coronavirus pandemic is likely to create a constitutional crisis for the country as the first meeting of a special parliamentary committee will on Tuesday decide how the National Assembly’s budget session will be conducted in the wake of the outbreak.

The task seems to be a difficult one amid reports that two staff members of the Parliament House have tested positive for Covid-19.

The Parliament House building was closed for three days (Friday to Sunday) as a precautionary measure after the two staff members became victims of the virus.

Conducting a budget session to pass the finance bill is a constitutional requirement and it cannot be passed when the National Assembly is not in session.

The Pakistan Muslim League-Nawaz (PML-N) government — whose tenure was scheduled to end on May 31, 2018 — presented its last budget in April, two months ahead of its schedule. But the Pakistan Tehreek-i-Insaf (PTI) after coming into power made some amendments in the process of the budget’s presentation.

The committee has been mandated to suggest amendments in the Rules of Procedure and Conduct of Business in the National Assembly, 2007, if any, for holding virtual session of the assembly during the coronavirus pandemic; to make recommendations for detailed working to hold virtual session of the assembly; to make other recommendations; and to present a report to the speaker at the earliest.

A source told Dawn that the Parliament House would be reopened on Monday (today) for routine work and for holding meetings of special and standing committees.

It has been learnt that the special committee, which has three former speakers of the NA as its members, has been working on different options to hold the budget session of the lower house so that the government could announce the money bill and get it passed by the assembly. Usually the budget is announced in June.

Under one of the options, a virtual session is being considered which can be attended by MNAs through video links while sitting in halls of provincial assemblies of their provinces. But, conducting a session through video link on Zoom or any other network is considered insecure and could be hacked or interrupted by hackers.

The use of Zoom App has registered a sharp increase for educational and business purposes since the imposition of lockdowns across with the world, but at the same time there have been many reports of interruptions on it.

Media reports said that Singapore had banned the use of video conferencing on Zoom by teachers after some objectionable videos were shown on it.

The special committee may contact the Pakistan Telecommunication Authority (PTA) and other relevant authorities to make arrangements for secured video conferencing.

According to the source, one of the fears is that a virtual session of the assembly can be disturbed by hackers and that if a member complains that he/she is not clearly hearing the voice of the speaker there will be no other option but to stop the session.