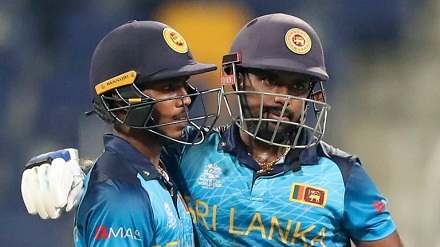 ABU DHABI: Charith Asalanka’s batting heroics were backed up by a fine bowling display as Sri Lanka ended defending champions West Indies’ slim hopes of advancing to the semi-finals with an emphatic 20-run victory in their last T20 World Cup game on Thursday.

In reply, West Indies, who won the toss and elected to field, lost their power hitters cheaply before getting restricted at 169-8, leaving Australia and South Africa to fight for the final semi-final spot from Group 1 where leaders England are already effectively through.

Shimron Hetmyer narrowed the defeat with a fighting unbeaten 81 off 54 balls, but Sri Lanka always looked favourites to finish on winning note.

“I think we were below par,” Pollard said. “Our bowlers did okay, they got 189 but it was a very good batting track. The way Sri Lanka played, they didn’t bat us out of the game but played very smartly.

“We are not going to hide from the fact that it’s been disappointing for us. I’m sure all the guys are hurting in that dressing room. It’s something we didn’t see coming but we have to face reality.”

Earlier, the experienced Kusal Perera (29) got Sri Lanka off to a brisk start that was consolidated by a superb 91-run stand between the in-form duo of Nissanka and Asalanka.

Asalanka was particularly severe on the Windies fast bowlers, striking eight fours and a six en route to his second T20 fifty before captain Dasun Shanaka’s quickfire cameo of 25.

“Overall it’s a very good victory,” Shanaka said. “These youngsters have been working hard, so I’m really happy. The batsmen were brilliant and the bowling was also brilliant throughout the tournament.”

Inexperienced Sri Lanka bowed out of the tournament with four points, defeating Bangladesh and West Indies while losing to England, South Africa and Australia.

Two-time champions West Indies, having a solitary win over Bangladesh, take on Australia in their last group game on Saturday.