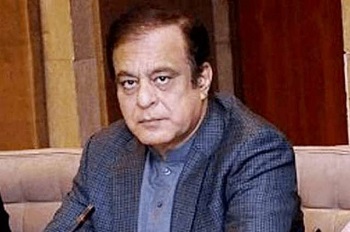 ISLAMABAD: Leader of the House in the Senate Syed Shibli Faraz Monday was appointed Federal Minister for Information and Broadcasting in place of Dr Firdous Ashiq Awan, who headed the ministry as PM’s special assistant for an year.

Similarly, former Director General ISPR Lt Gen (R) Asim Saleem Bajwa was appointed Special Assistant to PM on Information and Broadcasting. Hence, ever since the PTI formed its government with its allies in 2018, the information ministry would have formally two members of the cabinet to take care of it. Dr Firdous had replaced Ch Fawad Hussain in April last year, who was federal minister for information less than an year. The removed special assistant to PM, through tweets, has given reaction to this sudden development while the media, particularly social media is flooded with several charges against her, which she vehemently rejected.

The soft-spoken Senator Shibli is son of prominent poet late Ahmad Faraz and is third member of the Senate of Pakistan to make his way to the federal government. Already, ruling PTI’s Senator Muhammad Azam Swati and Senator Barrister Farogh Naseem are part of the cabinet.

A notification issued by the Cabinet Division states that the Prime Minister has been pleased to remove Dr Firdous Ashiq Awan from the office of special assistant to PM on information and broadcasting with immediate effect. The key development has happened less than three weeks after a major cabinet reshuffle was made in the backdrop of much-discussed wheat and sugar crises.

Interestingly, the announcement about this key development was made by Federal Minister for Science and Technology Ch Fawad Hussain, who through tweet billed Shibli Faraz as truly an honourable and dignified man and a brilliant Asim Saleem Bajwa and that both would make a great team and wished them all the best.

He tweeted, “Truly an honorable and dignified man @shiblifaraz has been appointed new information minister of Pak, and a brilliant @AsimSBaj was appointed SAPM on info both ll make a great team.... all the best”.

Senator Shibli was elected as member of the Senate in March 2015 from Khyber Pakhtunkhwa and was made Leader of the House in August 2018. He led the treasury benches in the House, wherein, combined opposition enjoyed a decisive majority.

He heads as chairman of the Senate’s Standing Committee on Commerce and a special committee on circular debt, having served as a banker previously. Moreover, Senator Shibli contributes in the House standing committee on planning, development and reforms, water resources and climate change, as their member, besides being a member of the high profile parliamentary committee on CPEC.