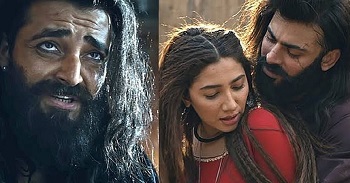 “Parents might not find the film suitable for their kids because of the graphic nature of few scenes so I would strictly advise against bringing children to cinema. Such outright violence is not for the faint-hearted and little ones.”

TLOMJ claims to be the biggest action movie in the history of Pakistan and with that kind of statement it's understandable that action-packed fighting sequences will have their fair share of blood and gore.

Bilal Lashari's contemporary take on the Punjabi cult classic Maula Jatt has been years in the making, with all of us on the edge of our seats for its release. Finally it was announced last week that the film is ready to hit cinemas this year. The film stars Fawad Khan as Maula Jatt and Hamza Ali Abbasi as Noori Nath.

“The film transcends cultural and linguistic divide," said Lashari. "The content will be very palatable to the new generation that in times to come will extend the immortality of the fictional characters, Maula And Noori.”

Lashari has also written the screenplay for the film along with veteran film writer Nasir Adeeb, who wrote the original 1979's Maula Jatt. The film will hit cinemas on Eid-ul-Fitr.

President stresses not to neglect orphans, thalassemia-hit children in pandemic