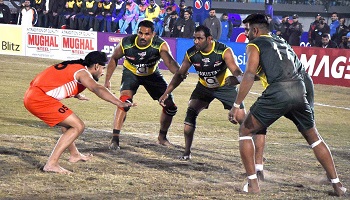 LAHORE: Three more matches were decided in the Kabaddi World Cup (indigenous style) here at the Punjab Stadium on Tuesday. Defending champions India outclassed Sierra Leone 45-18 after leading 22-8 at the half time.

In another match, Germany also recorded a comfortable 49-28 defeat against England.

The competition then returns to Lahore for the semi-finals and final on Feb 15 and 16.