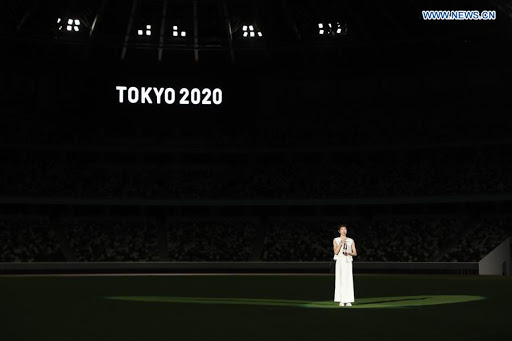 TOKYO: In Tokyo, which should have been buzzing with thousands of athletes and fans by now, organisers held a ceremony at near-empty National Stadium, with the public barred as infections surge in the city.

Japan marked a year-to-go until the postponed Tokyo 2020 Olympics with a subdued ceremony Thursday as the raging coronavirus pandemic fuels fears about whether the Games will go ahead at all.

Japanese star swimmer Rikako Ikee, who has been battling leukaemia, drew on her health struggles in a personal message of support to disheartened athletes who should have been readying for competition.

“Think of the coming year not simply as a one-year postponement, but a plus-one,” she said, after holding up the Olympic flame contained in a small rose-gold lantern.

“For athletes around the world and for all those they inspire, I have faith that one year from now the flame of hope will light these very grounds,” she added.

The decision in March to delay the Games came as the real scale of the pandemic began to emerge and countries imposed lockdowns that threw training into chaos and forced the cancellation of qualifiers and test events.

Since then lockdowns have eased in many places, but elsewhere the virus continues to rage -- or authorities are warning of a second wave.

Tokyo itself recorded a record 366 daily infections on Thursday, with the city’s governor asking residents to stay home over a four-day holiday weekend.

Despite the setbacks and downbeat mood, Japanese and Olympic officials have not wavered from the message that the Games will take place, serving as a symbol of the world’s recovery from the virus.

They will be “an unprecedented celebration of the unity and solidarity of humankind, making them a symbol of resilience and hope,” International Olympic Committee chief Thomas Bach said in a statement Thursday.

There is little appetite for a further delay, with experts and officials including Bach and Japanese Prime Minister Shinzo Abe mooting the prospect of the first peace-time cancellation of the multi-billion dollar Games if the pandemic is not under control by next year.

Public sentiment in Japan also appears less than optimistic, with two polls in July showing the majority of Japanese think the Games should be postponed again, or cancelled altogether.

Only somewhere between one quarter and a third of respondents in the polls thought the Games should open as scheduled on July 23, 2021.

“I’m afraid about the situation even next year,” 50-year-old Sachiko Ahunwan, a department store employee, told AFP. “I wonder if people will come.”

The one-year postponement has caused a host of logistical and financial headaches, but one major obstacle has been cleared with Tokyo 2020 confirming this month that it has secured all the venues originally contracted for the Games.

The competition schedule has also now been set, largely along the lines of the original programme.