Turncoats of every size-colour to be defeated in Punjab by-polls: Imran Khan 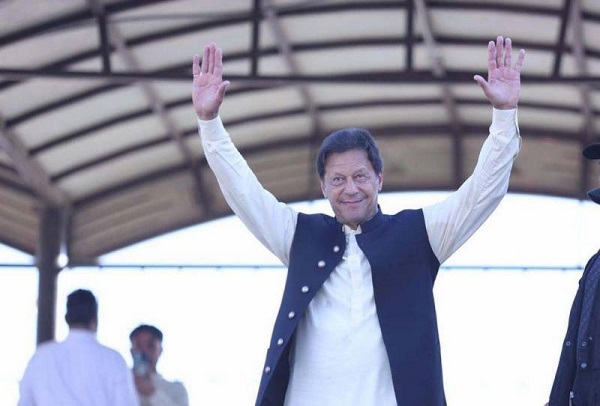 While addressing a public gathering in Sheikhupura, he said that he had appointed the IGP Punjab and the chief secretary because they were honest. "But you two have been meddling in the by-polls through administration on the directives of [Chief Minister] Hamza Shehbaz, which is illegal," Imran Khan said, warning them to be watchful as "the entire country has its eyes on Punjab by-elections" and the nation would not spare them over the illegal interference. He said everything would become crystal clear on July 17, the by-election day, and any official involved in illegal activities would be brought to justice.

Imran said that "turncoats of every size and colour" would be defeated in Punjab by-polls on July 17. He also termed the incoming by-elections a war between two ideologies. “We will win these polls as the people have stood against the imported regime," he added.

Addressing the chief minister Punjab, Imran Khan said: “Hamza [Shehbaz], you cannot win the elections [by-polls] no matter what you do.” He alleged that the Sharif family and Chief Election Commissioner (CEC) Sikandar Sultan Raja were "colluding to rig the upcoming by-elections”.

He said the PML-N was distributing Rs10,000 each to buy votes for the upcoming by-elections in Punjab. “You [people of Punjab] should take money from them; however, cast your vote in favour of the PTI,” he said. “On the basis of my experience, I know we have already won the election,” he said, congratulating the people ahead of the polls.

The PTI chief reiterated that he wanted friendly ties with every state including the US and India, but “would not embrace slavery or compromise on the blood of Kashmiris”. “I ask the US who are you to say to me that I shouldn’t be going to Russia,” the former premier said, adding that India, for the benefit of its people, is purchasing oil from Russia despite being an ally of the US.

Referring to the incumbent government, he said: "American slaves in the country could not dare purchase oil from Russia as it would displease their masters." Separately, Imran Khan said that the country had no future under Shehbaz Sharif and Hamza Shehbaz and they could not beat the PTI even in cahoots with neutrals.

Addressing a rally in Dharampura area of Lahore in connection with the by-election in Punjab, he said that it was his first visit to Dharampura. “Pakistan is the only country in the world that was built in the name of Islam,” Imran Khan said and added “we have to defeat these turncoats by winning the election as this is not a war of power but a war of all of us”.

The ex-premier said the country had no future with Shehbaz Sharif and Hamza Shehbaz in power, adding that the Sharifs had been robbing the country for the past 30 years and “we have to fight these traitors”.

The PTI chairman said that he had been trying for two-and-a-half years to make the next elections transparent and “our government created EVMs and took steps for transparency in elections, whereas the incumbent rulers by closing the way for transparency of elections abolished the use of EVMs".