Two criminals killed in encounter with police in Karachi 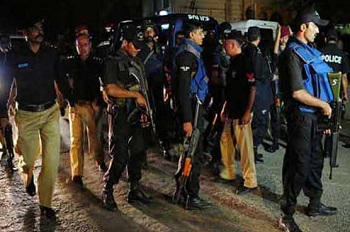 KARACHI: Two suspected criminals were killed in an alleged encounter with police in Wazeer Brohi Goth off Superhighway on Tuesday, as a pre-dawn raid on the city’s outskirt turned into a deadly gun battle, officials said.

A senior official said that acting on intelligence reports about the presence of some criminals belonging to an organised gang a team of Counter-Terrorism Department (CTD) raided their hideout within the remit of the SITE-Superhighway police station where an encounter ensued.

“The personnel of law-enforcement agencies cordoned off the area,” said Raja Umar Khattab of the CTD. “The armed men in the hideout attacked our team when they were busy taking positions. The attack led to retaliation from our side, which triggered an exchange of gunfire. After an encounter, two armed men were killed. Later, we searched the hideout and found arms from their possession.”

He said the deceased were identified as Ali Dost and Liaquat and investigators had found out that both were involved in the killing of an on-duty intelligence official in February this year.

“The bodies have been moved to the Edhi morgue after completing medico-legal formalities at a hospital. We are sending the arms recovered from them for a forensic examination to ascertain the possibility of their use in any other criminal activities,” said CTD official Khattab.