Ulema to be taken on board while deciding about prayers-religious congregations: Arif Alvi 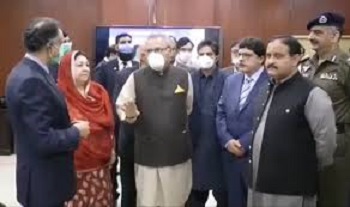 ISLAMABAD: Dr Arif Alvi on Wednesday stressed the need for taking ulema on board while deciding about prayers and other religious congregations, especially Taraveeh during upcoming holy month of Ramazan if the lockdown continues for maintaining social distancing.

President Dr Arif Alvi said that coronavirus was not a political but a national issue and the government, entire nation and all institutions were making joint efforts to get rid of the pandemic.

The president was briefed about performance of various departments including Health Department to contain coronavirus spread, continuation of educational activities, lockdown and exemptions, heat mapping, CM’s Insaf Imdad Programme and all other steps taken so far by the provincial government.

President Dr Arif Alvi commended the Punjab government efforts in fighting coronavirus. He, however, stressed the need for early supply of ration and financial support to the needy and deserving families, whose wages/sources of income had been affected severely due to prevailing situation. The way the country’s institutions were performing and their working was improving, he hope that it would lay the basis for the New Pakistan.

The president directed the authorities concerned to ensure that owners of those industrial units functioning presently were adhering strictly to the standard operating procedures (SOPs) and the advisory/guidelines to protect their labourers/workers from corona pandemic. Secondly, these industrial labourers should also be issued standard identity numbers/passes so that they could not face any difficulty on their way to the workplaces and home during the lockdown and imposition of Section 144.

He said that since Infectious Diseases Prevention and Control Ordinance-2020 had been promulgated in Punjab, all other such laws existing already should be merged or set aside accordingly for smooth and effective implementation in this regard.

In response to Provincial Health Minister Dr Yasmin Rashid’s demand for ventilators as well as hydroxychloroquine, that was reportedly helping reduce corona infection duration, the president said that import of 3D/digital printing machines and its materials were banned during the lockdown; however, the commerce minister recently issued a notification allowing its import to ensures availability of 3D printed ventilators in Pakistan. He added that the Ministry of Science and Technology and some other local institutions had also developed ventilators, which were in testing process, and would be made available after their approval. However, Punjab should place its actual demand so that the federal government could provide them as soon these were available with it.

As far as hydroxychloroquine was concerned, he said, the drug was being manufactured in various countries such as Germany, USA, France and Turkey, and the federal government had contacted Turkey in this regard. As soon it reaches Pakistan, Punjab would also be supplied accordingly, he promised.

Punjab Governor Chaudhry Mohammad Sarwar commended the efforts and crisis management by bureaucracy, police, health department, doctors, paramedics and all other institutions fighting on frontline against corona pandemic. He also stressed the need for early supply of ration and financial support to the poor families.

Punjab Chief Minister Sardar Usman Buzdar apprised the president that the provincial government had responded very quickly to corona outbreak and released Rs 236 million to the Health Department on January 13, 2020 and another grant of Rs 14 million recently, while the Provincial Disaster Management Authority (PDMA) also released a total of Rs 2.3 billion to all divisional and district administrations to fight the corona pandemic, besides establishing quarantine centres, and corona telemedicine helpline centres to facilitate and guide people about anti-corona measures at their homes.

Similarly, the Punjab government also gave approval for recruitment of 10,000 doctors so as to effectively cope with dreaded virus, he said and mentioned that monetary support for each deserving family had been enhanced from Rs 4,000 to Rs 12,000, while the number of beneficiaries had also been increased from 1.7 million to 2.5 million families under the CM Insaf Imdad Programme and Ehsas Programme of the federal government. Dr Yasmin Rashid told the meeting that suspected corona patients were being treated at quarantine centres, while those with positive COVID-19 were being hospitalized. On the directions of the Punjab chief minister, she added, that BSL-III laboratories were being established at divisional headquarters in the province. She said that corona testing capacity would increase three times, if the province was provided with digital extraction kits, as manual extraction process was very slow. The meeting was told that Taleem Ghar Programme had also been launched to ensure continuation of education through online medium and cable TV. Currently, lectures are being delivered for class one to eight and there were around 12 million students in 54,000 schools across the province. If a student misses a lecture, he/she could find the same on the website etc.