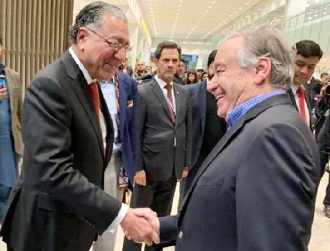 Upon his arrival at Nur Khan Airbase — his first official visit to Pakistan as the UN chief — Guterres was received by Pakistan’s Permanent Representative to the United Nations Munir Akram as well as senior officials of the Foreign Office and United Nations in Pakistan.

Ahead of his arrival, Guterres said he would express gratitude for those serving as peacekeepers. Taking to Twitter, he said: "Pakistan is one of the most consistent and reliable contributors to UN peacekeeping efforts around the world.

"I am travelling to Pakistan, where I plan to express my gratitude to the people #ServingForPeace."

During his visit, Guterres is expected to meet with Prime Minister Imran and other high-level government officials, his spokesman said.

On Tuesday, he will visit Lahore where he will meet students and attend an event on Pakistan’s polio vaccination campaign. He will also travel to Kartarpur to visit the Sikh holy site of Gurdwara Kartarpur Sahib.

Responding to a question, the spokesman said the UN chief will not be visiting the disputed Kashmir region during this trip.

During his visit, the UN chief will speak at the international conference '40 Years of Hosting Afghan Refugees in Pakistan'.

The two-day conference in Islamabad, starting on February 17, will be a recognition of Pakistan’s "tremendous generosity" in hosting millions of refugees from Afghanistan over four decades, his spokesman Stephane Dujarric said during a regular noon briefing at the UN Headquarters in New York on Friday.

The conference, which is being organised by the Government of Pakistan and the United Nations Refugee Agency (UNHCR), will be inaugurated by Prime Minister Imran Khan. Various senior US officials will also attend the conference.