We are ready to continue dialogue with US: Putin 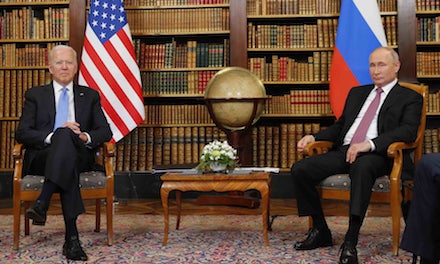 The Russian leader said the meeting was “quite friendly” and that he and Biden “were able to understand each other on key issues”.

Putin said the US president was a “professional” and “you have to be very attentive when working with him so as not to miss something”. “So what that he sometimes confuses things,” Putin said.

“It is not because she is poorly educated or has a bad memory, just when people think that some things are secondary they don’t focus too much attention on them,” he said. Putin said “Americans think that nothing is more important than themselves”.

After talks that lasted more than three hours, the leaders issued a brief statement agreeing to start dialogue on nuclear arms control, a key issue after Biden’s predecessor Donald Trump withdrew from a bilateral arms accord with Russia.

On Thursday, the joint statement was hailed by senior Kremlin officials.

“Even though it’s a very short text, the joint statement on strategic stability realises the special responsibility of our two countries not only to our people but to the whole world,” Putin’s spokesman Dmitry Peskov said in a radio interview on Thursday.

Diplomatic relations between Moscow and Washington had all but broken down since Biden took office, with tensions high over a long list of disputes, from cyberattacks and election meddling to human rights violations.

While Putin described the Geneva summit as “constructive”, there were no concrete announcements apart from an agreement to bring back respective ambassadors, who both returned home earlier this year.

Earlier on Thursday, Russia’s Deputy Foreign Minister Sergei Ryabkov said the rejection of the possibility of a nuclear war by the two sides was a “significant achievement”.

Since the extension of the New START nuclear treaty under Biden, “this is Washington’s second step in restoring common sense and a responsible approach to key aspects of international security,” Ryabkov told Kommersant business daily.

New START is the last remaining arms reduction pact between the two nuclear states that hold more than 90 percent of the world’s nuclear weapons, according to the Stockholm International Peace Research Institute.