We will fight coronavirus pandemic jointly as a nation: Imran Khan 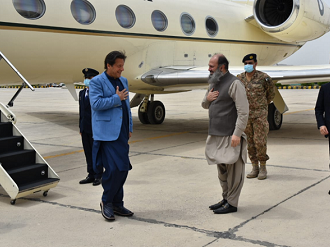 Talking to the media and addressing members of the Balochistan cabinet and parliamentarians after presiding over a meeting during his day-long visit to Quetta on Thursday, the prime minister said all the provincial governments would take decisions on April 14 whether to continue or ease the lockdown in view of the coronavirus situation in their provinces.

Prime Minister Imran Khan has said Balochistan will be the province most affected by the lockdown as its poverty level is more than any other part of the country due to joblessness of daily-wage earners and other poor people, as well as its impact on small business.

Prime Minister Khan expressed the apprehension that by the end of the current month the number of Covid-19 cases would increase in the country and put pressure on hospitals and health system. However, he said it was a matter of satisfaction that none of the coronavirus patients in Balochistan had been put in the intensive care unit of any hospital.

He said that only Quetta was a populous city while other cities and towns of the province had a small population where the situation could be brought under control. “I feel that Balochistan will be less affected by the pandemic.”

But the situation in big cities of the country like Lahore, Karachi, Rawalpindi, Peshawar and Faisalabad could worsen due to their big population in case the number of coronavirus cases rose there, he feared.

He said Pakistan had meagre resources but the countries having big and strong economy were also facing difficulties in fighting the pandemic. He said the government was reviewing the situation very keenly and getting data from other countries, especially from India and Bangladesh, as they were also facing the same situation as Pakistan. The National Command and Operation Centre was analysing the situation on a daily basis and the government adopting measures for future planning on the basis its data and reports, he added.

The prime minister said the government focusing its attention on supply of safety gear and other medical equipment to doctors and health staff. “Doctors, paramedics, nurses and other health workers have been provided PPE (personal protective equipment) and the government is making all-out efforts for their safety and protection.”

Mr Khan said the purpose of his visit to Quetta was to review the situation in the province with regard to the impact of the lockdown due to coronavirus. Balochistan, he said, would be affected badly because of its poverty as it would face joblessness of daily-wage earners and other poor people following the closure of businesses of small shopkeepers and traders.

However, he said the federal government had launched the biggest relief programme in the country’s history under which Rs12,000 each would be provided to 12 million families of poor and daily-wage earners as financial assistance. All arrangements had been completed in this regard and the programme would be implemented across the country in the coming two weeks.

“Federal and provincial governments are coordinating with each other in dealing with the coronavirus situation,” he said, adding that the Centre would provide all-out assistance and cooperation to the provinces in this regard.

The prime minister appreciated the efforts and arrangements made by the Balochistan government to combat the pandemic. He said the federal government was fully aware of the problems and financial constraints of the common man due to the lockdown, adding that a comprehensive strategy would be made to ensure continued supply of ration to the poor and daily wagers. “Policy will be evolved with the consultation of provincial governments,” he added.

Earlier, Prime Minister Khan visited a quarantine centre set up at the Bolan Medical Collage Hospital Complex, where the authorities concerned briefed him on medical facilities like availability of ventilators and medicines. He was accompanied by National Assembly Deputy Speaker Qasim Suri.