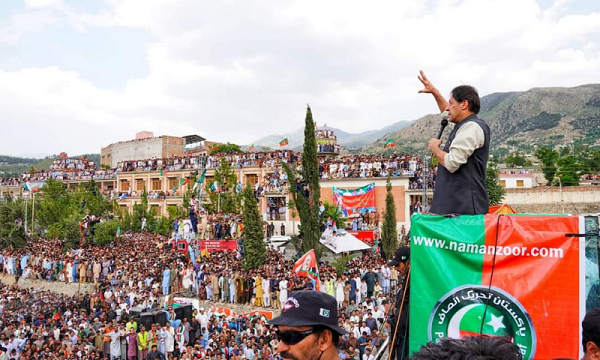 DIR: Pakistan Tehreek-e-Insaf (PTI) Chairman Imran Khan Saturday said if the nation did not take to the streets due to the fear of Yazid of today, history as well as the upcoming generations would never forgive it.

He said it was a matter of national security as a weaker economy means a weaker security.

Imran said he wanted to ask Shehbaz Sharif a question that if he lacked the capacity to run the government, why did he hatch a conspiracy to oust him. “And now when you have formed the government, you should take the responsibility and set the economy right,” he told the incumbent prime minister.

Declaring the present economic upheaval a result of his government's ouster, Imran said it was the responsibility of the neutrals to protect the government in the face of foreign- orchestrated conspiracy. "It was agreed in the National Security Council meeting that the remarks of the US undersecretary were tantamount to interfering in the internal affairs of the country. And the 'neutrals' should have defended the government to foil the conspiracy," the former prime minister said.

Imran said that fair and fresh elections were the only panacea to steer the country out of the economic and political morass. People should be given a chance to elect a government to meet the challenges, he added.

"Shehbaz Sharif is a good boot-polisher, but he has no guts to overcome the challenges," the PTI chief said, adding that the so-called hard working prime minister of the 'imported' government was in a state of confusion as he had failed to handle the situation. He claimed that Shehbaz Sharif was "nervous" nowadays and there's a "strange" fear on his face as he castigated the government over rising inflation.

"You [Shehbaz Shari] have been brought to power under a conspiracy and you must deliver instead of travelling here and there," he said. "Shehbaz Sharif has stated that everything has happened because of Imran Khan, so they should have let Imran Khan stay in power," the PTI chairman said. Khan asked the government that if they "cannot handle" the country's issues, then why did they remove him from power through the alleged conspiracy.

Imran Khan also alleged that his opponents were trying to rig the next general election with the help of the Election Commission of Pakistan. "But they would fail in their designs," he said. The former prime minister said he would not accept the 'imported' government and urged the people to wait for his call for a long march.

Imran Khan said the economy was in a shambles when the PTI came to power after the 2018 general election, but they handled things tactfully. "We had put the country back on track," he claimed and cited various achievements of his government.

The PTI chief blasted the government for increasing the prices of oil by Rs60 per litre under the pressure of the International Monetary Fund (IMF). "We had not bowed to the IMF and tried our best to provide relief to people," Imran Khan said and termed the present economic indicators of the country alarming. "A strong army can't defend you if your economy is weak," he said.

Imran Khan said that after an increase in the prices of oil and electricity tariff, the government had increased the gas tariff by 45 per cent also. "We will not accept this illegal government and we will not allow the economic murder of the people," he said. The PTI chief said Shehbaz Sharif and Asif Zardari had joined the conspiracy to oust the PTI government just to absolve themselves of the corruption cases.

"There were Rs24 billion corruption cases against Shehbaz Sharif and his son Hamza Shehbaz," he said, adding the duo would have been in jail had there been an independent investigation and FIA been given a free hand to pursue the case.