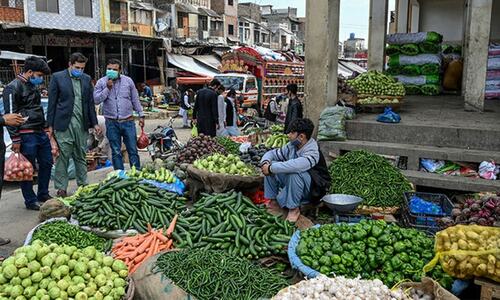 KARACHI: After seven weeks, the Sensitive Price Indicator (SPI) for the week ending on November 25 witnessed a decline of 0.67 per cent week-on-week, while it swelled by 18.6pc year-on-year (YoY).

Analysts said the SPI had plunged after seven weeks but it may not prove relief as the Consumer Price Index (CPI) for November may enter into double digits.

Fahad Rauf of Ismail Iqbal Research said CPI is expected to clock in double digit from November i.e. 10.1pc versus 4MFY22 average of 8.7pc and October reading of 9.2pc. He said food, electricity and petroleum prices would be major contributor on MoM basis.

He said the State Bank of Pakistan SBP had predicted 7pc to 9pc in CPI in FY22 but “in my opinion, CPI would range between 10.5pc to 11pc. However, in the first half of January-June 2022, the CPI is feared to range between 11.50-12pc due to rising energy prices and rupee devaluation against the dollar, which would increase the landing cost of imported finished and raw material items’ prices.

He said in case Covid-19 makes a comeback, then the possible decline in oil prices would drive the food inflation down from 10pc. He added that crude oil price WTI on Friday had plunged by 10pc to $69.50 per barrel. Mr Tariq projected CPI for the calendar year 2022 at 10pc.