World affairs should be handled through consultation by all countries: China 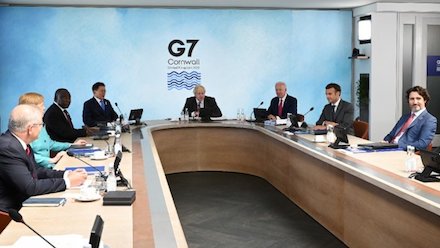 LONDON/BEIJING: China Sunday warned the G7 leaders that the days when a "small" group of countries decided the fate of the world were long gone.

The comments, by a spokesman for the Chinese embassy in London, come as the leaders, who met in England, sought a unified position on China, reports the international media.

The spokesman was quoted by an international news agency as saying: "We always believe that countries, big or small, strong or weak, poor or rich, are equals, and that world affairs should be handled through consultation by all countries."

The embassy noted that the only legitimate global “order” was based on UN-backed international law, and not the “so-called system and order advocated by a handful of countries.”

Beijing supports “genuine multilateralism” based on the principles of equal treatment and cooperation, and rejects the “pseudo-multilateralism” which only serves the interests of a “small clique,” the spokesperson added.

Attempts to “gang up” on Beijing will fail, Chinese Foreign Ministry said on Thursday, calling for a more “objective and rational” approach to international relations. China has long maintained that Washington’s influence over global affairs was waning.

In its strongest rebuke of China, the G7 Sunday called for a fresh investigation into the origins of the coronavirus pandemic and urged China to “respect human rights and fundamental freedoms” in Hong Kong and Xinjiang.

The Group of 7 leaders ended talks in Cornwall, on the southwest coast of England, with direct and indirect references to China, highlighting the need to support democratic societies and to strengthen supply chains and support development in crucial techologies.

They supported a new investigation into the origins of COVID-19, which was first detected in the central Chinese city of Wuhan.

“We also call for a timely, transparent, expert-led and science-based WHO-convened phase 2 COVID-19 origins study including, as recommended by the experts’ report, in China,” the statement read, referring to the World Health Organization. Britain, the European Union and the United States all made similar calls before the summit.

The group called on China “to respect human rights and fundamental freedoms, especially in relation to Xinjiang and those rights, freedoms and high degree of autonomy for Hong Kong enshrined in the Sino-British Joint Declaration and the Basic Law”.

The statement underlined “the importance of maintaining a free and open Indo-Pacific, which is inclusive and based on the rule of law”. “We underscore the importance of peace and stability across the Taiwan Strait, and encourage the peaceful resolution of cross-strait issues. We remain seriously concerned about the situation in the East and South China seas and strongly oppose any unilateral attempts to change the status quo and increase tensions,” it said.

In a press briefing after the communique was released, Biden criticised Beijing’s refusal to allow full access to laboratory records and virus samples that could provide help fight COVID-19 as an example of the government’s lack of transparency, not only in finding the source of the pandemic, but in the way Belt and Road Initiative infrastructure projects are handled.

“We haven’t had access to the laboratories,” Biden said. “I have not reached a conclusion because our intelligence community is not certain yet whether or not this was a consequence from the marketplace about bats interfacing with animals in the environment that caused this COVID-19 or whether it was an experiment gone awry in the laboratory.”

“China has its Belt and Road Initiative, and we think that there’s a much more equitable way to provide for the needs of countries around the world,” he said, promoting the “Build Back Better World (B3W) plan presented as an alternative to China’s initiative.

“We believe that will not only be good for the countries, but good for the entire world and represent values that our democracies represent, and not autocratic lack of values,” he added. Also in reference to China, the G7 statement said the group would “cooperate where it is in our mutual interest on shared global challenges, in particular addressing climate change and biodiversity loss in the context of COP26 and other multilateral discussions”.

Regarding China’s role in the multilateral system, the G7 will “continue to consult on collective approaches to challenging non-market policies and practices which undermine the fair and transparent operation of the global economy”.

In a statement after the summit’s conclusion, British Prime Minister and G7 host Boris Johnson did not mention China directly, but appeared to head off some of the criticism that has already come from Beijing.

“It’s not good enough for us to just rest on our laurels and talk about how important those values are. And this isn’t about imposing our values on the rest of the world. What we as the G7 need to do is demonstrate the benefits of democracy and freedom and human rights to rest of the world,” Johnson said.

China was mentioned four times over 25 pages, but countless other sections allude to Beijing without mentioning it by name. It mentioned the G7’s much-vaunted infrastructure drive, which has been billed as a “green” alternative to China’s Belt and Road Initiative, but still, few details were revealed.