462 Pakistanis stranded in Afghanistan came back 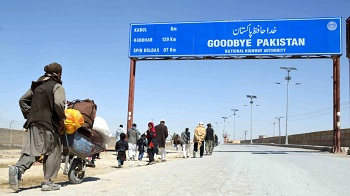 LANDI KOTAL: A total of 462 Pakistanis stranded in Afghanistan came back via the Torkham border crossing on Saturday, taking the total number of returnees to 1,632 so far.

Shamsul Islam, deputy assistant commissioner of Landi Kotal and focal person for the return of stranded Pakistanis, told Dawn that more stranded Pakistanis were expected to come back via the Torkham border in the coming days. However, the exact number of the remaining Pakistanis, he said, was not yet known.

He said the ones who had arrived on Saturday included 379 men, 47 women and 60 children.

He said that after the completion of necessary immigration procedure at the Torkham border, the returned Pakistanis were shifted to quarantine centres at Jamrud Fort and Government Degree College, Jamrud.

Mr Shams said that swab samples of the newly returned persons would be taken after 48 hours of their arrival while they would be given complete health facilities along with three meals a day.

Meanwhile, a statement issued from the office of the Khyber deputy commissioner on Saturday said that as many 1,501 persons returned earlier from Afghanistan were kept in different quarantine centres of Khyber district.

It said that tests on swab samples of at least 1,135 were conducted till April 24 out of which 83 Pakistanis who had recently returned from Afghanistan and 11 locals had tested positive for novel coronavirus, while 835 had no symptoms of the virus. Results of 165 were awaited while the district administration had so far admitted 63 affected persons to the isolation wards of local hospitals.