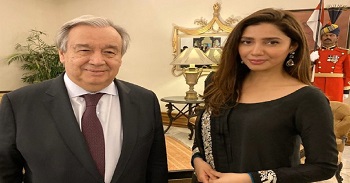 Later, he took to Twitter to share that it was a pleasure meeting the starlet who feels strongly about speaking up for refugees around the world.

“As we mark 40 years of Pakistan’s solidarity with Afghan refugees, it was a pleasure to meet @Refugees Goodwill Ambassador @TheMahiraKhan .I thank her and all Pakistanis for their extraordinary support,” he wrote.

A Refugee Summit was held in Islamabad to mark 40 years of hosting Afghan refugees in Pakistan. Addressing the summit, UN Chief said that the world must act and deliver for Afghan refugees.

The Raees actor had volunteered at the Afghan refugee camps in Karachi and Peshawar for UNHCR.

In December last year, Mahira featured in a UNHCR video along with fellow Goodwill Ambassadors and raised the plight of refugees.

“Pakistan has hosted the refugees for nearly forty years thereby setting an example for the world,” she said.

She was named as the United Nations High Commissioner for Refugees’ (UNHCR) Goodwill Ambassador for Pakistan in November 2019.

The United Nations High Commissioner for Refugees (UNHCR) is a United Nations agency with the mandate to protect refugees, forcibly displaced communities and stateless people, and assist in their voluntary repatriation, local integration or resettlement to a third country. UNHCR’s mandate does not apply to Palestinian refugees, who are assisted by UNRWA.