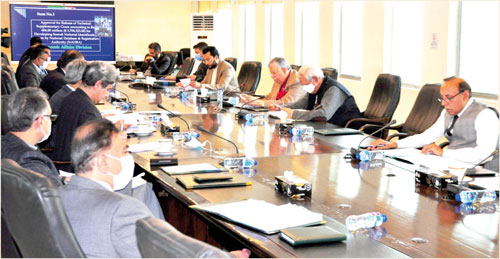 ISLAMABAD: Pakistan on Thursday cleared a legal mechanism to provide for barter trade with Iran and Afghanistan. The decision was taken at a meeting of the Economic Coordination Committee (ECC) of the cabinet which also decided to build 500,000 tonnes of strategic reserves of sugar and lift 1.2 million tonnes of wheat at a minimum support price of Rs1,950 per 40kg amounting to Rs65 billion.

The meeting, presided over by Finance Minister Shaukat Tarin, did not approve Utility Store Corporation’s (USC) Ramazan subsidy scheme and subsidy on five key items for first 23 days of February but cleared it for March and the six remaining days of February.

According to an official statement, the meeting took up a commerce ministry’s summary for ‘grant of regulatory support for establishing barter trade arrangements with Afghanistan and Iran’ and, after discussions, “allowed regulatory cover to barter trade arrangements by amending relevant provisions of Export Policy Order (EPO) 2020 and Import Policy Order (IPO) 2020”.

Trade between Pakistan and Iran has been stagnating for more than a decade mainly due to US sanctions on Tehran, while Pak-Afghan formal trade has been suffering in the absence of a banking system and Washington’s decision to freeze Afghan central bank’s assets.

The same mechanism would also be replicated with Afghanistan given its heavy reliance on Pakistan for essential commodities.

The challenge, however, was that under the EPO 2020, Pakistani exports are covered by the State Bank of Pakistan’s Foreign Exchange Regula­tions which do not provide for barter trade arrangement. Likewise, imports under the IPO 2020 are allowed under SBP’s payment procedures.

In order to overcome this challenge, the ECC on the recommendations of the commerce ministry decided to insert a clause “provided that exports and imports shall also be allowed under barter trade arrangements” approved by the ministry in both EPO and IPO 2020. The modalities to make barter trade arrangements would be separately notified by the commerce ministry in consultations with the SBP and the Federal Board of Revenue.

On another summary submitted by industries and production ministry, the ECC allowed the continuation of subsidy on five essential items — wheat flour, ghee, sugar, rice and pulses — for a period from Feb 24 to 28 and for the month of March this year.

Since the USC had already continued with subsidy on these products in February without prior approval, the finance minister directed the corporation to seek guidance of the law and justice ministry on the continuation of subsidy on these items for initial 23 days of February.

Most probably, the ECC would later give ex post facto approval of subsidy on the advice of the law division for these 23 days.

The Ministry of National Food Security and Research (MNFSR) presented a summary on fixing of Passco’s (Pakistan Agricultural Storage and Services Corporation) wheat procurement targets along with cash credit limits.