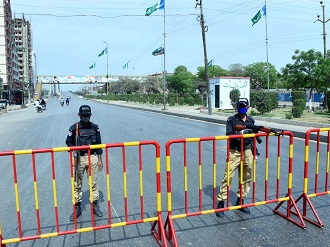 ISLAMABAD: The capital administration extended the lockdown of the city for another eight days as the number of Covid-19 patients rose to 82 on Monday. Seven more cases surfaced in the city. Besides 22 of the 200 people belonging to various cities, who arrived from Turkey three days ago, also tested positive.

Deputy Commissioner Islamabad Mohammad Hamza Shafqaat confirmed that the number of coronavirus cases had increased to 82. He also said the lockdown in the capital had been extended for eight days.

The decision was taken under the guidelines issued by the government as a precautionary measure, Mr Shafqaat added.

A notification issued by the deputy commissioner said Section 144 imposed on March 24 on public gathering and social distancing has been extended till April 14 with exemptions given from time to time by the district magistrate.

About the new cases, the deputy commissioner said they were reported from E-11, G-10 and Tramri. Samples of the patients’ family members were sent for tests and their results were awaited, he said, adding that the houses of the patients were sealed and declared quarantine centres for them as well as their families.

About the 22 passengers who tested positive, Mr Shafqaat said they were being kept in quarantines in different hotels of the city. The other people were allowed to go to their respective areas with the direction to self-isolate themselves at their homes for two weeks, he added.

Meanwhile, the capital administration decided to delay the de-sealing of Bhara Kahu and Shahzad Town on the advice of the health department.

“So far screening of 80 to 90pc of the residents living in these areas has been completed and samples of suspected patients, including seven in Bhara Kahu, have been sent to laboratory for tests,” Mr Shafqaat said, adding that the health department has advised not to de-seal these areas until it cleared them. “After a few days, the health department will be approached for advice over the matter,”the deputy commissioner said.

On the other hand, branches and outlets of exchange companies licensed by the State Bank of Pakistan were allowed to continue their operations.

Another notification issued by the deputy commissioner said: “I notify that branches/outlets of exchange companies licensed by State Bank of Pakistan are allowed to continue their operations keeping in view these are essential financial service providers.”

Further more, all services related to exchange companies were allowed to operate.

The capital administration also permitted optical shops to open their business to meet the citizens’ requirement. The optical shops shall remain open with a maximum of one helper at the most in each shop, the notification said.

The branches and outlets of the exchange companies and optical shops would strictly abide by the precautions issued on March 24. They would also ensure measures required for maintaining social distance by customers and employees.