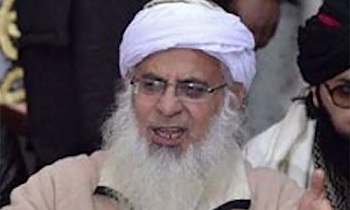 ISLAMABAD: A case has been registered against former Lal Masjid cleric Maulana Abdul Aziz and six others for disobeying a government order, spreading fear and inciting people against the state.

The case was registered with the Aabpara police on a complaint lodged by SHO Inspector Mohammad Walyat against Mr Aziz and six others under Pakistan Penal Code sections 505(b) (with intent to cause, or which is likely to cause, fear or alarm to the public or to any section of the public whereby any person may be induced to commit an offence against the state or against the public tranquility) and 188 (disobedience to order duly promulgated by public servant).

According to the Aabpara police, Mr Aziz gathered people at Lal Masjid for Friday prayers despite a ban on prayer congregations imposed to prevent the spread of the coronavirus. He provoked the sentiments of people, they added.

Officials deployed around the mosque informed them of the ban on prayer congregations and the misuse of loudspeakers, but they ignored. They said around 400 people gathered at the mosque whose sentiments were provoked by these actions.

A separate case has been registered with the Golra police against a khateeb and two others for disobeying an order issued by the government. The khateeb was arrested after the case was registered, but the other two people remained at large, the police said.

They said the suspects violated the ban on prayer congregations in Bilal Masjid in E-11/4. The violations led to 200 people gathered at the mosque, putting their lives and the lives of others at risk.

The capital administration has asked the police to compile data on mosques, khateebs and imams who violated the ban on prayer congregations on Friday.

Every police station in the capital arrested three to four imams and khateebs who violated the ban on prayer congregations on Friday, but they were released after they were given warnings.

Police have been asked to compile data on them so action can be taken against them if they ignore the warnings. Obtaining undertakings from them that they will not disobey the order is also being considered.

A total of 121 cases disobeying the administration’s order have been registered in the capital since the lockdown was announced, police said. Some 424 people have been booked and arrested for violating the ban on various activities imposed to halt the spread of the coronavirus.

Violations include social and public gatherings, riding pillion, running passenger vehicles and opening shops - not including those selling food items.

All the alleged violators were produced in the court of the magistrate and assistant commissioners for further action.

Most were released on personal surety and others were fined, officials said. A few, allegedly involved in hoarding and profiteering, were sent to jail.