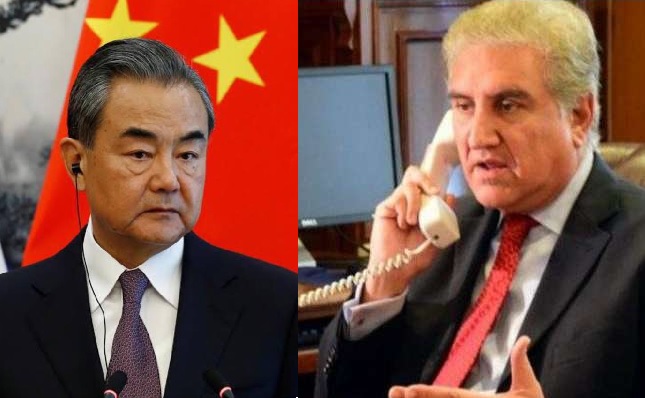 Talking to his Chinese Counterpart Wang Yi over phone, he said apart from committing egregious violations of human rights in Occupied Kashmir, India is seeking to change the demographic structure of the occupied territory.

The Foreign Minister briefed Wang Yi that in the face of Indian provocations on Line of Control, Pakistan is exercising restraint.

He underscored that disputes in the region should be resolved through peaceful means rather then resorting to unilateral, illegal measures like Indian step of August, 5 last year.

He reiterated that Pakistan firmly supports China on its core interests including Hong Kong, Taiwan, Tibet, and Xinjiang.

Briefing Foreign Minister Qureshi about the regional situation, Wang Yi lauded Pakistan's sincere and relentless efforts to promote peace and stability in the region. He also thanked Pakistan for the support it has extended to China in difficult times.

Both sides reaffirmed their resolve to support each other at the multilateral institutions and hoped that those institutions would foster a spirit of objectivity and coherence in advancing their goals.

The two Foreign Ministers expressed determination to promote peace and development in Afghanistan.

Pakistan and China have also reaffirmed the resolve to take measures aimed at earliest possible economic recovery in the aftermath of COVID-19.

He emphasized that, in the aftermath of COVID-19, Beijing is taking swift and practical measures to promote economic recovery in the region.