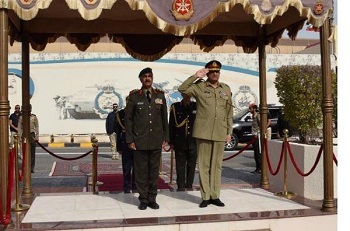 Earlier, on arrival at the Army Headquarters, the COAS was received by Chief of General Staff Kuwait Armed Forces Lieutenant General Mohammed Khaled Al-Khadher. A smartly turned out contingent of the Kuwait Army presented a guard of honour to the COAS.
During the meetings, matters of mutual interest, bilateral defence and security cooperation, regional peace and stability were discussed.

The political and military leadership of Kuwait highly appreciated the professionalism of Pakistan Army and determination of the Pakistani nation in combating terrorism.

Both sides agreed to increase bilateral cooperation in fields of defence and security, including export of defence products, training, provision of trained manpower or human resource and cooperation in counter-terrorism domain.