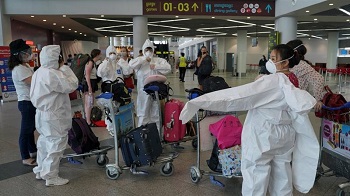 ISLAMABAD: The global death toll from the coronavirus pandemic topped a quarter of a million on Tuesday, with the US government predicting a further surge in fatalities as an international vaccine drive garnered $8 billion in pledges.

The dire forecast from the United States came as much of the Western world emerged from weeks of lockdown, with hopes that the disease may have peaked in Europe after nearly two months of confinement.

Financial markets saw a light at the end of a tunnel as businesses in Europe and the United States tentatively reopened, and stocks and oil prices rallied Tuesday, international media reported.

But the global progress did little to cool a war of words between the US and China -- fuelled by American claims the virus originated in a Chinese laboratory, a theory the World Health Organisation (WHO) labelled "speculative."

Since the disease first surfaced in China late last year the number of confirmed cases has crossed 3.7 million while fatalities have topped 256,000.

Europe remains the hardest-hit continent with around 144,000 deaths while the US has recorded over 71,300, the biggest single-country toll.

The United Kingdom has overtaken Italy to report the highest official death toll from the new coronavirus in Europe, figures released on Tuesday showed, increasing pressure on Prime Minister Boris Johnson over his response to the crisis.

Weekly figures from Britain’s Office for National Statistics (ONS) added more than 7,000 deaths in England and Wales in the week to April 24, raising the total for the United Kingdom to 32,313.

Only the United States, with a population nearly five times greater, has suffered more confirmed fatalities from the virus than Britain, according to the data so far.

Tuesday’s figures are based on death certificate mentions of COVID-19, the disease caused by the novel coronavirus, including suspected cases.

While different ways of counting make comparisons with other countries difficult, the figure confirmed Britain was among those hit worst by a pandemic.

The bleak figures were compounded Monday by an internal government estimate in Washington that forecast the COVID-19 infection rate in the US could surge eight-fold to 200,000 a day by June 1, and the daily death toll could rise to 3,000.

And Russia has emerged as a new coronavirus hotspot. It is now the European country reporting the highest number of new infections, with a total of over 155,000 cases.

"The threat is apparently on the rise," Moscow mayor Sergei Sobyanin has warned, urging residents to respect confinement rules in the capital.

The lockdown has however had one worrying impact -- reported cases of domestic violence in Russia have more than doubled. Elsewhere in Europe, Germany´s biggest state Bavaria said it would allow restaurants to open from mid-May, with pressure growing on Chancellor Angela Merkel to ease stay-at-home measures that have plunged the economy into a deep recession.

As the race is on to find a way to stamp out the virus, a special telethon backed by the WHO but snubbed by Washington pulled in $8.1 billion to support international efforts to develop a vaccine.

"This was a powerful and inspiring demonstration of global solidarity," said WHO chief Tedros Adhanom Ghebreyesus.

Seeming to defend its non-participation, the State Department insisted the United States is "leading" the global response to the COVID-19 pandemic, and said it has spent more than $1 billion together with US drug companies to work on a vaccine.

But the White House has stepped up an offensive against China, with Secretary of State Mike Pompeo saying there is "enormous evidence" the virus emerged in a lab in the Chinese city of Wuhan.

That claim was rejected Monday by the WHO as well as top US epidemiologist and government adviser Anthony Fauci.

"Everything about the stepwise evolution over time strongly indicates that (this virus) evolved in nature and then jumped species," he said.

US President Donald Trump has acknowledged that deaths will go beyond his earlier prediction of 60,000, saying: "We´re going to lose anywhere from 75, 80 to 100,000 people."

His estimate underscored the tough, politically-tinged debate over reopening, which pits concerns about a rising death toll against the need to restore national economies shattered by prolonged shutdowns.

Meanwhile, coronavirus cases in Asia rose to a quarter of a million on Tuesday, according to international media reports, driven by outbreaks in Singapore, Pakistan and India, even as China, South Korea and Japan significantly slowed the spread of the disease.

The region where the COVID-19 pandemic started has fared better overall than North America and Europe since the first case was reported in Wuhan, China on Jan. 10.

It has taken Asia almost four months to reach the 250,000 infection milestone, a level that Spain alone is approaching just a little over two months since reporting its first case.

At 250,650, Asia now accounts for just 7 percent of global cases, compared with 40 percent for Europe and 34 percent for North America, although experts worry that unreported infections are masking the true extent of the pandemic.

Infection may cause only mild symptoms and not everyone with symptoms is tested, while most countries only record hospital deaths, meaning deaths in private homes and nursing homes have not yet been included.

Iran on Tuesday announced that confirmed coronavirus infections had reached almost 100,000 in the country as fresh cases picked up again after a brief drop in recent days.

"The number of confirmed infections with this disease is now close to 100,000," health ministry spokesman Kianoush Jahanpour said in televised remarks.

Jahanpour said that another 1,323 people tested positive for the virus during the same period, bringing the overall number to 99,970.

Two-thirds of the fresh cases were "those sampled as outpatients" or family members of those infected, Jahanpour said.

Meanwhile, French President Emmanuel Macron confirmed plans to gradually reopen schools next week amid concerns from mayors, teachers and parents about the timing.

Macron, wearing a mask, visited a primary school in a suburb west of Paris on Tuesday that has remained open for children of health workers.

More than 300 mayors in the capital region, including Paris mayor Anne Hidalgo, urged Macron in an open letter to delay the reopening of primary schools scheduled for next week.

They denounced an “untenable and unrealistic timetable” to meet the sanitary and safety conditions required by the state, including class sizes capped to a maximum of 15. The majority of French children attend public schools.

Many parents say they won’t send their children back to school as France is one of the world’s hardest-hit countries by the coronavirus.The head of public health authority RKI said on Tuesday the reproduction rate for the coronavirus pandemic in Germany is currently estimated at 0.71.

That number indicates that 100 infected people infect on average 71 others, meaning the number of new infections would fall over time.

In Israel, a parliamentary panel authorised Shin Bet security service to continue using mobile phone data to track people infected by the coronavirus until May 26 despite privacy concerns.

Prime Minister Benjamin Netanyahu had sought a longer extension, of six weeks, as his government advances legislation to regulate the practice in line with the demands of the Supreme Court, which is worried about dangers to individual liberty.

Circumventing parliament in March, as the coronavirus spread, Netanyahu’s cabinet approved emergency regulations that enabled the use of the technology, usually deployed for anti-terrorism.

France starts lifting confinement measures on May 11, with businesses to resume activity and parents to return to work.

India’s federal health ministry Tuesday said 179 new deaths due to COVID-19, besides fresh 3,597 positive cases, were reported since Monday evening in the country, taking the number of deaths to 1,568 and total cases to 46,433