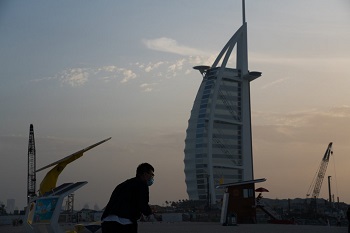 DUBAI: The United Arab Emirates directed most of the public and private sectors to have the majority of staff work from home, and imposed overnight curfews as a temporary measure this weekend for a nationwide disinfection to combat the coronavirus.

The regional business hub, which has confirmed 333 cases of the virus and two deaths, has not announced an official curfew or work suspension but has increasingly clamped down on movement.

Authorities announced restrictions on movement of traffic and people overnight from Thursday until Sunday for the disinfection drive. The restrictions will last from 8pm (1600 GMT) to 6am.

Only essential service workers would be allowed out and violators will face fines, a security forces spokesman said in a press conference on Thursday.

Public transport including trams and metro services will be suspended, while private cars, cabs and delivery vehicles can operate outside those hours.

The UAE has slowly followed other Gulf states in suspending passenger flights and closing public venues such as restaurants and malls. Dubai emirate on Wednesday directed the private sector to implement remote working for most staff but exempted a broad spectrum of businesses.

On Thursday, the UAE government ordered all federal ministries and establishments and the private sector to limit the number of staff in offices to 30pc. It exempted sectors providing essential services including health, finance, energy, telecoms, security, military, cargo and food.

Kuwait and Saudi Arabia have taken the most drastic steps, including imposing partial nationwide curfews and suspending work at most public and private sector establishments.

Kuwait on Thursday banned all taxis, directed the state supply company to cover any basic food shortages and said it would disburse a month’s salary to all Kuwaiti students abroad.

The number of cases in Saudi Arabia passed 1,000 after authorities on Thursday announced 112 new infections, most of them in the capital Riyadh and the holy city of Makkah. They also reported a third death from the virus, a resident in Madina who suffered from chronic diseases.

Kuwait, Bahrain and Qatar also saw more cases, taking the total in the six Gulf states to over 2,600, with nine deaths.

Saudi Arabia has released 250 foreign detainees held on non-violent immigration and residency offences as part of efforts to contain the spread of the disease, the state-backed Human Rights Commission said on Thursday.

Bahrain continued to evacuate several hundred Bahraini pilgrims stranded in Iran, which is an epicentre for the disease in the region.

A second repatriation flight of around 60 Bahrainis arrived overnight from the holy city of Mashhad, operated by Iranian airline Kish, said a Bahraini official.

Bahrain earlier this month repatriated 165 people, but a number of subsequent scheduled flights were cancelled. At least 85 of the first batch of evacuees tested positive for the virus.