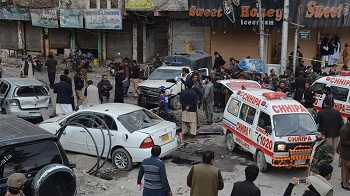 QUETTA: Eight people, two police personnel and a Levies Force man among them  were martyred and over 20 others injured in a suicide attack near Quetta district courts and press club on Monday.

The suicide bomber had attempted to break through a police barrier and enter a rally, but blew himself up on facing resistance from security personnel, Quetta police chief DIG Abdul Razzak Cheema said, adding that eight people lost their lives and over 20 others were injured in the explosion. No one had claimed responsibility for the suicide bombing till late into night.

The officer said the target of the suicide bomber was apparently the (Ahle Sunnat Wal Jamaat) rally being held outside the press club to mark the death anniversary of Hazrat Abu Bakr.

DIG Cheema said the police had cordoned off the area to provide security to the participants of the rally. “A youngster came to the site on foot and tried to break into the rally, but when the police personnel did not allow him to enter the area he blew himself up,” he said, adding that the police officials laid down their lives while saving those in the rally.

Soon after the explosion, security forces cordoned off the blast site as a bomb disposal squad started collecting evidence. The DIG said the head of the suspected suicide bomber was also found at the blast site.

A senior BDS official said: “It was a suicide blast in which around 6kg of explosive material was used.”

Earlier, rescue workers shifted the bodies to the Civil Hospital where the government had decla­red a state of emergency. Dr Wasim Baig, spokesman for the hospital said: “We received eight bodies and over 20 injured in civil hospital.” He described the condition of nine of the injured persons as serious.

The suicide bombing damaged half a dozen vehicles, including motorcycles and rickshaws, besides windowpanes and doors of many nearby shops and buildings.

Police later sealed the blast site, as a team of officials from Lahore is expected to arrive here on Tuesday for further investigation.

CM Alyani ordered the authorities concerned to submit a detailed report of the incident and take all possible measures to trace and arrest the culprits.

He said: “Enemies of peace and progress of Balochistan and Pakistan are attempting to destabilize the country.” He instructed the law enforcement agencies to improve security measures in the capital and other parts of Balochistan.

The chief minister also directed the relevant authorities to provide best medical facilities to the injured. He expressed his deep sorrow and grief over the death of innocent people and security officials, and prayed for their families. He also prayed for the early recovery of the injured persons.