Fawad Alam again made it to test squad 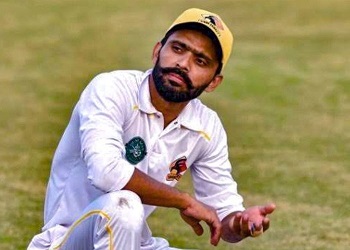 Batsman Fawad Alam was made part of Pakistan's national Test squad that was announced on Saturday for the upcoming Test matches against Bangladesh.

The batsman, who has a 40-plus batting average in both Tests and ODIs, was also included in the squad for the Test series against Sri Lanka last year, but did not make it to the final team. It remains to be seen if he will be included in the playing 11 in the upcoming Tests.

He played his last international Test match in November 2009. Though his international numbers are rare, his domestic statistics are outstanding which has led spectators to question why selectors have refused to include him in the national team.
Chief selector Misbahul Haq announces Test squad for upcoming Tests against Bangladesh in a press conference in Lahore. — DawnNewsTV

Azhar Ali will captain the team while bowler Bilal Asif and all-rounder Fahim Ashraf have been recalled. Batsmen Shan Masood and Babar Azam, who starred in the Test matches against Sri Lanka in December last year, have been retained. Abid Ali, Asad Shafiq, Imamul Haq and Haris Sohail are also part of the squad.

Kashif Bhatti and Usman Shinwari have been dropped, the press release added.

While talking to reporters today, Misbah hoped that the team will hold on to the same momentum seen in the Test series against Sri Lanka, which Pakistan won by 1-0. He expressed confidence that the team will perform well as long as it focuses on its performance.