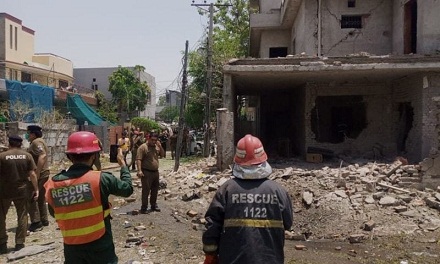 LAHORE: Law enforcement agencies (LEAs) have expanded the scope of investigation into the Johar Town blast and suggested placing the provincial capital and Islamabad on high alert after initial reports suspected a “foreign hand” behind the terrorist activity.

The LEAs raided the house of the arrested suspect, Peter Paul David, and recovered important documents that apparently linked the incident to external elements. Moreover, two local facilitators were taken into custody from Khyber Pakhtunkhwa and Lahore.

An official privy to the investigation told Dawn that the security agencies located David’s residence in Mehmoodabad, Karachi South. They seized a Pakistani passport that showed him frequently visiting and living in the United Arab Emirates as well as a National Identity Card for Overseas Pakistani (Nicop).

They discovered he held another country’s nationality, the official said, adding that David had visited an Arab country where he is said to have been tasked with carrying out the blast. He further said the bomb blast had been discussed in the backdrop of the changing political and security situation in Afghanistan at some high-level meetings, fearing more such attacks.

He also revealed that local facilitators were running secret auto workshops in Lahore, Islamabad, Rawalpindi and Peshawar where they fitted vehicles with explosives.

The LEAs were closely observing the foreign trips of David and the people he met there to reach his “foreign handlers”. They suspected the handlers could be operating from a neighbouring country, and were also tracing the funding for Wednesday’s attack.

David had shifted his family from abroad to Karachi in 2010. He had visited Lahore thrice during the last month. He ran a scrap and hotel business in a foreign country and visited it last a month and a half back, the official source said.

Meanwhile, a report submitted to Chief Minister Usman Buzdar stated that the blast occurred at 11:15am and a local resident had reported it to the police. Around 12 vehicles parked near the blast site were completely and partially damaged.

Quoting intelligence and surveillance staff, the report, a copy of which is available with Dawn, confirmed that the blast was carried out through a remote control. It caused severe damage to seven nearby houses and some shops, while police were awaiting the forensic report to determine nature of the explosive material used.

“No banned organisation has claimed responsibility yet,” the report reads.

The official source said the prime suspect who had parked the car on Maulana Shaukat Ali Road, Johar Town and disappeared after the blast was also said to be a foreigner.

CCTV footage showed him slowing down his car near a private hospital along the canal in Johar Town and inquiring from someone the directions to his destination. He seemed to be completely unaware of the area, as he stopped several times to seek help from passersby.

After the blast, the suspect reached the Sherakot Bus Stand and left the city through a passenger bus, and the LEAs were tracing where he travelled next.

To a question, the source said the blast also exposed security lapses at the exit-entry points where armed personnel cleared the car to enter the city. “When the car was stopped at Babu Sabu Interchange, police didn’t check its trunk,” he said, suggesting an inquiry to revisit the security arrangements to prevent such attacks in the future.