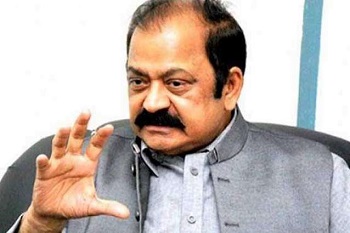 LAHORE: The Pakistan Muslim League-Nawaz (PML-N) has asked the government to either go for a “complete and strong lockdown” or lift it as “smart lockdown” is serving no purpose in the fight against Covid-19.

The party believes that the “smart lockdown” measures have not only turned out to be a complete failure, but have also opened floodgates of corruption by police and local administration.

“There is either a lockdown or no lockdown. There is no concept of smart lockdown. The federal and provincial governments have already wasted a lot of time since Feb 26 when the first coronavirus case surfaced in Pakistan... by not going for the option of strong lockdown that has resulted in the fast spread of the virus,” PML-N Punjab president Rana Sanaullah said on Saturday.

He said that instead of continuing this “confused” policy, the federal and provincial governments should impose a “complete and strong lockdown” or simply lift it as the purpose of stopping the spread of the virus could not be achieved through ongoing “smart lockdown”, besides it was adversely affecting the economy.

“The federal and provincial governments should have followed China and completely locked down the country for two weeks after the virus surfaced in the country and subsequently opened the economy phase wise,” the PML-N leader said. “But the governments, particularly the federal government, have remained confused. Therefore the PTI government is responsible for the failure to stop the spread of the virus as ample time has been wasted.”

Mr Sanaullah, who is considered close to former premier Nawaz Sharif, said had the government gone for a strong lockdown the “question of opening mosques would not have arisen”.

“Through this confused lockdown policy, the government has given a licence of corruption to police and local administration that are busy in taking bribe from traders over opening of their businesses,” he said. “Similarly, it is naïve to allow shops to open for a limited period inviting a huge rush and thus causing the spread of the virus. Some intelligent brains should tell the government that the longer grocery and other shops will remain open, the lesser rush they would attract,” the former law minister said.

PML-N Punjab information secretary Azma Bokhari questioned as to why the Pakistan Tehreek-i-Insaf government would not shun its policy of “smart lockdown” for saving the lives of the people. She said since the government had failed to implement its guidelines about congregational prayers at mosques, it should review its decision.