Grocery stores-food shops to operate between 8am and 5pm: Sindh CM 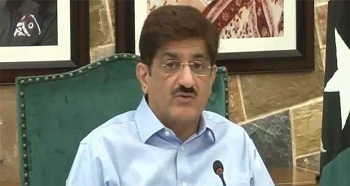 The CM resorted to tightening the lockdown regime after the locally transmitted cases of COVID-19 in Sindh reached 10 per cent of the total cases in the province.

"This is a dangerous trend; therefore, we have to contain it further by observing necessary precautionary measures and by honouring the government decision of lockdown," Murad asserted. “Therefore, I have decided to curtail the daily operational hours of the grocery shops and food stores by three hours from Saturday during the lockdown regime in place in Sindh.”

Murad said that excluding the cases of pilgrims who returned from Iran, there were 168 cases of COVID-19 in the province, of which 102 had been transmitted locally. “This shows that the local transmission of the virus is still taking place; therefore, we all have to observe a complete lockdown, otherwise, we will not be in a position to control the situation,” he warned.

Expressing concern over the apathetic attitude of some people towards the pandemic, the CM said our people would have to understand the gravity of the ongoing situation. “We earlier decided to close shops from 8am to 8pm but people started taking undue advantage of the decision and kept on roaming here and there,” he said, adding that now the grocery shops would not operate after 5pm.

He directed Sindh Inspector General of Police Mushtaq Mahar to implement the order. He told the police chief not to allow people moving here and there without any solid reason. Commenting on the decision to restrict the number of people in the congregational prayers, the CM said this was a difficult decision and was taken with a heavy heart.

“This decision has been taken after proper consultations with Ulemas of different schools of thought and other stakeholders,” he remarked and added that through the decision was aimed at saving people from the local transmission of COVID-19.

He told that meeting that he had offered Friday prayers at his home. “At home, I kept following the Imam of our mosque who was leading the Juma prayer in the mosque on the loudspeaker and we should all follow such a pattern,” he said.

To protect the lives of domesticated birds and animals, the government has allowed the shops of such animals and birds, and those of their food items to operate between 12 noon and 2pm. Sindh Inspector General of Police (IGP) Mushtaq Ahmed Mahar has accordingly issued the new directives to the provincial police force for their implementation.

In his earlier directive to his subordinates, the IGP had referred to the home department notification and told the officers to implement its orders in letter and spirit. The IGP told the police to ensure that the grocery and departmental stores were closed during the aforesaid timings. The same rule of timings also applied to the medical stores, except those that were within public or private hospitals or adjacent to them.

The police were directed to ensure that no industries, except those related to essential food items and medical and related items for domestic consumption, operated at any time of the day.

IGP Mahar told the police force that all industrial units producing any non-essential items must remain closed as the gathering of factory workers could help spread COVID-19. “In this regard, I am directed to convey you additional measures and guidelines as it has become extremely urgent to implement [them] for the purpose of breaking the chain of spread of the virus and police shall ensure implementation of such guidelines in letter and spirit,” the IGP’s directive read.

As many as 147 people were arrested and 48 more cases registered by the Karachi police for allegedly violating Section 144 on the fifth day of the lockdown on Friday, bringing the number of people detained so far to 1,084.

On the other hand, law enforcement agencies continued their crackdown against the hoarders, arresting 104 people for storing masks and sanitisers across the city and registered cases against them.

Section 144 has been imposed against the gathering of four or more people across Sindh. Since the province-wide lockdown to combat the novel coronavirus was imposed at midnight at the start of Monday, police officials started patrolling roads and streets of the city to ensure that no one stepped out of their home without a justifiable reason.

On Thursday, as many as 205 people were arrested and 56 more cases registered by the Karachi police allegedly violating Section 144 on the fourth day of the lockdown on Thursday.

Karachi West Zone DIG Captain (retd) Asim Khan on Friday visited different parts of the city under his jurisdiction to inspect the lockdown.

He met the police officials and personnel deployed at the checkpoints and guided them about how to deal with the people during the lockdown regime.

The DIG said on the occasion that the police constables should remain alert at the checkpoints and three lanes would be established at every checkpoint. The first lane, he said, should be used for the free movement of emergency service vehicles, the second lane for checking of the ordinary vehicles and the third lane for providing a U-turn to the vehicles whose onward journey would not be allowed.

He asked the police officials and personnel at the checkpoints to adopt a friendly attitude while dealing with the people. The police should interact with the people in a courteous manner, he said.

The DIG stated that the police officials performing their duties at the checkpoints were to be divided into different batches so that each of the batch would have to perform their duties for eight hours daily and the policemen were able to work punctually with the best of their abilities.