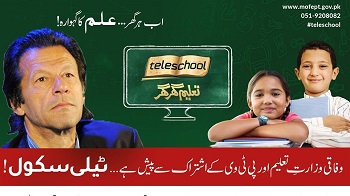 ISLAMABAD: Prime Minister Imran Khan on Monday inaugurated a national broadcast education channel to mitigate the loss faced by the students due to the closure of educational institutions till May 31 in the wake of coronavirus pandemic.

Teleschool the dedicated TV channel will be aired through a beam provided by Pakistan Television (PTV) from Tuesday (today) across the country from 8am to 6pm for online education from class one to 12.

Speaking at its launching ceremony, the prime minister said that teleschool would help students learn during the closure of schools. This initiative would also help the government reach the remote areas, which didn’t have access to education facilities and infrastructure, Mr Khan said.

He said as Pakistan had a large number of out-of-school children (OOSC), this initiative could promote primary education and focus on the OOSC.

He said no one could predict when Covid-19 would be eliminated, as it could take two, three or six months. He said this project was highly productive in the given circumstances.

The PM was of the opinion that this project should continue even after the pandemic was over and reopening of schools. He said it would help promote education in remote areas while the concept could also be used for telemedicine.

He said that adult literacy could also be promoted through this project. He appreciated all those officials who played their role to launch this project.

Minister for Federal Education and Professional Training Shafqat Mahmood at the launch told the premier that education ministry was also mulling to develop an app to benefit over 20 million out-of-school children and promote adult literacy.

About country’s literacy rate, the minister said: “We have just 60 per cent literacy rate”. He said the education ministry was trying to link education with technology so that adults who wanted to learn had access to education through mobile phones.

Special Assistant to Prime Minister on Information and Broadcasting Dr Firdous Ashiq Awan was also present at the launch of teleschool.

Officials of the education ministry told Dawn that the dedicated TV channel, teleschool, would be available on satellite, terrestrial and cable networks so that it would be accessible to most parts of the country, including hard-to-reach remote areas, ensuring equity in learning. An officer of the education ministry said that the ministry initially inked an agreement with PTV for three months, but if needed it could be extended as the PM also expressed his desire for the project’s continuation.

Joint Secretary (Education) Syed Umair Javed, who had supervised the content development process, told Dawn that online content was developed in accordance with country’s curriculum and it was made attractive for students.

“The credit of making this project possible in less than a month goes to unsung heroes: content developers, teachers and staff of Federal Directorate of Education, editors, techs and producers of Allama Iqbal Open University and PTV,” he said.