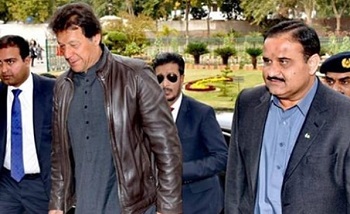 LAHORE: Prime Minister Imran Khan reached Lahore on Saturday for a one-day visit. According to Radio Pakistan, the premier will be the chief guest at a distribution ceremony for Sehat Sahulat Cards.

During his visit, Imran held a one-on-one meeting with Punjab Chief Minister Sardar Usman Buzdar, where the two discussed the overall situation in the province and the pace of development projects.

The prime minister began his one-day visit by calling on the Punjab Safe City Authority headquarters where he was briefed on the scope of the project, and on making security effective through the project.

Punjab Governor Chaudhry Sarwar, the Punjab chief minister, and members of the provincial assembly were also present on the occasion. Imran also launched the global portal for the Police Khidmat Markaz, the report added.