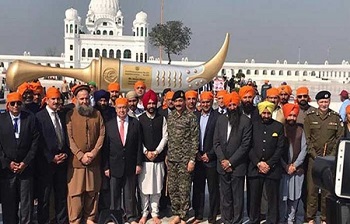 KARTARPUR: UN chief Antonio Guterres on Tuesday said the opening of the Kartarpur Sahib Corridor is a practical example of Pakistan’s desire for peace and inter-faith harmony, as he visited the revered Gurdwara Darbar Sahib, the final resting place of Sikhism founder Guru Nanak Dev.

The Pakistan Sikh Gurdwara Parbhandhik Committee and Evacuee Trust Property Board officials received the UN Secretary-General at Kartarpur Sahib, some 125kms from Lahore. A Sikh boy presented him a bouquet.

Guterres was also briefed about the Kartarpur Corridor pact between Pakistan and India. He was told that Pakistan Prime Minister Imran Khan took this initiative to facilitate the Sikh community of India and elsewhere to visit the shrine. In a post-trip tweet, the U.N. chief said he was honored to visit what he described as “a corridor of hope, connecting two key Sikh pilgrimage sites.”