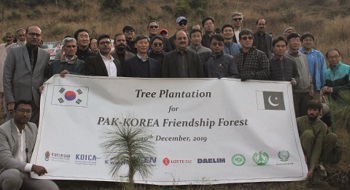 HARIPUR:  The Embassy of Republic of Korea and the KP provincial government officially inaugurated ‘Korea-Pakistan Friendship Forest’ in Haripur. The Korea-Pakistan joint project in collaboration with Korean business community would be very instrumental in enhancing awareness about nationwide movement to plant 10 billion trees built on the success of ‘The Billion Tree Programme’ in KP.

As a part of the official launch of the forest on Tuesday, around 7,000 saplings were planted in Haripur, KP province, in presence of Kwak Sung-kyu, ambassador of the Republic of Korea; Bahramand Khan, Secretary of KP Public Health Engineering Department; Azhar Ali Khan, Chief Conservator of KP Forest Department; and Miangul Adnan Aurangzeb, former MNA.

The Korean Embassy has resolved to upscale the friendship forest over the next few years in partnership with various stakeholders, including the Korean business community in Pakistan. “The Korea-Pakistan Friendship Forest not only gives support for Pakistan’s nationwide green growth initiative, but also symbolises the close friendship between Korea and Pakistan. Planting trees has been an important national campaign in Korea as Korean people we observe the tree-planting day on April 5, every year.