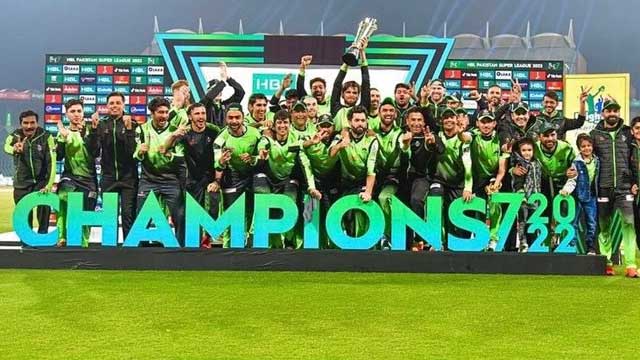 They were so efficient, so ruthless that they had the match all but wrapped up by the 11th over of the Sultans’ innings. Having sent half of Sultans’ batting line-up back to the dugout by then, it was a question then of by how much the Qalandars would win.

Ultimately it was by 42 runs as the Sultans were bowled out for 138 with two balls to spare in their chase of 181.

Having been part of the PSL since its inception, it took the Qalandars seven years to finally get their hands on the trophy. And it came in Shaheen Shah Afridi’s first season as the franchise’s captain.

“It was a difficult decision for me to take up the captaincy, and it was a challenge,” Shaheen said before lifting the trophy high into the night sky. “But I was backed by the senior players. Our team fought from the first day and till the last ball.”

Finals are won by teams whose players rise to the occasion. Backed on by a capacity crowd, Qalandars’ players turned up. Sultans, who’d finished top of the league standings ahead of the Qalandars and were looking to be the first repeat winners of the PSL, went missing.

After the Qalandars were rocked early on after choosing to bat, veteran Mohammad Hafeez anch­ored their innings with a magnificent 69 before providing them with two crucial breakthroughs with the ball. Harry Brook powered them with a 22-ball 41 not out. David Wiese, the hero of their victory over Islamabad United in Friday’s eliminator, hit an invaluable 28 not out off eight deliveries.

Hafeez wasn’t the only Qalandars’ bowler who impressed. Shaheen got three wickets to finish as the tournament’s top bowler with 21. Youngster Zaman Khan chipped in with two wickets. Fakhar Zaman, the tournament’s leading run-scorer, had an off-day with the bat but excelled in the field including a bulls-eye throw to run out Sultans’ opener Shan Masood.

It was that run out that very well tilted the balance of the game in Qalandars’ favour.

After a brisk start, Sultans’ talismanic captain Mohammad Rizwan (14) was cleaned up by Hafeez and he was followed by his opening partner six balls later when Shan failed to return to his crease after being turned back by Aamer Azmat.

Azmat was the next to go with Fakhar holding onto a superb catch while running backwards to give Hafeez his second wicket.

Zaman, the tournament’s emerging player, then rattled Asif Afridi’s stumps with a perfect cutter before he picked the prized wicket of Rilee Rossouw (15) to leave the Sultans at 63-5.

With the asking rate climbing, Sultans’ hopes rested on the big-hitting duo of Tim David (27) and Khushdil Shah (32). They shared a 51-run stand for the sixth wicket but it only delayed the inevitable.

When David holed out Shaheen to Fakhar on the first ball of the 17th over, it was the beginning of the end. Shaheen’s perfect yorker clattered into David Willey’s stumps. Haris did the same to Khushdil’s stumps as the Sultans’ batter tried to scoop him behind.

Another yorker from Shaheen breached tailender Rumman Raees’ defence before Wiese sealed the title for Qalandars when he had Imran Tahir caught.

“We have struggled to get the trophy but finally everything came together for us,” Hafeez said after being given the man-of-the-match award. “The mindset and vision have helped us win here.”

On his innings, he added: “It was important to absorb pressure and the partnership between me and Brook helped before Wiese finished it off well.”

Hafeez had arrived at the crease in the fifth over with the Qalandars in trouble at 26-3.

Fakhar had perished trying to slog-sweep Asif, Zeeshan Ashraf edged Willey’s outswinger to Rizwan before Asif had Abdullah Shafique stu­mped. All that happened in a space of 11 deliveries to put Sultans on top.

Hafeez, however, took no time to hit back. Rumman was belted through the off side for three boundaries in the sixth over, ensuring Qalandars finished the powerplay with 41 on the board.

Then after two low-scoring overs, he took on Khushdil. A six back over the bowler’s head brought up Qalandars’ fifty and Hafeez then pulled him away for a four.

While Hafeez was getting runs — and boundaries, Kamran Ghulam (15) was having a tough time in the middle and fell trying to hit Asif with Shan and David combining smartly on the fence to complete the catch.

The incoming Brook took his time to settle as Hafeez continued to find the boundaries but the Qalandars were still toiling for runs, reaching 113 with four overs to go.

Then came the onslaught from Brook. Rumman was placed for four through short fine leg on the first ball of the 17th over, which ended with two towering sixes over deep midwicket and long-on.

Hafeez started the next over by flicking Shahnawaz Dahani for a four but was gone next ball, caught at cover by Shan.

That gave Sultans some respite. But it didn’t last long as Willey and Shahnawaz were hit for a combined 40 runs in the last two overs.

Wiese started and finished off the penultimate over with sixes off Willey with Brook getting another in between. And after Brook hit Shahnawaz for a four off the first ball of the final over, Wiese ensured Qalandars finished their innings on a high with a lofted shot for six over long off and a top edge that flew for a boundary.

Wiese it was who sparked Qalandars’ celebrations in the end when he picked up Sultans’ last wicket to fall.

Qalandars were the only team who had beaten Sultans during the league stage. That one didn’t matter much. This one, however, did.