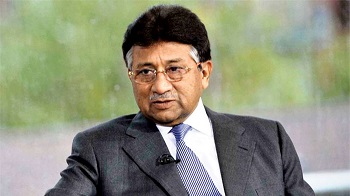 LAHORE: The Lahore High Court on Monday resumed hearing a set of petitions filed by former dictator Pervez Musharraf challenging multiple actions against him, including his conviction for high treason, the establishment of the trial court that convicted him and filing of the original high treason inquiry against him by the government.

On Friday, a full bench of the high court headed by Justice Syed Mazahar Ali Akbar Naqvi had asked the federal government to submit a summary on the formation of the special court and had directed the state's lawyer to present arguments on Monday (today).

A special court of Islamabad had on December 17, 2019, handed down the death penalty to Musharraf after six years of hearing the treason case against him. The case was filed by the PML-N government in 2013.

In his petition, Musharraf had asked the LHC to set aside the special court’s verdict for being illegal, without jurisdiction and unconstitutional for violating Articles 10-A, 4, 5, 10 and 10-A of the Constitution. He also sought suspension of the verdict till a decision on his petition is made.

During the hearing on Friday, the LHC had posed questions regarding the legality of the treason case and the formation of the special court that conducted the trial and had handed Musharraf the death sentence.

Barrister Ali Zafar, who has been appointed the court's amicus curea, said that the case against Musharraf seemed to have been filed on the behest of then prime minister Nawaz Sharif, as there is no record of the matter being on the agenda of any of the cabinet meetings held at the time.

"A case under Article 6 cannot be filed without the cabinet's approval," Barrister Zafar had insisted. The court asked if the matter was on the agenda of any cabinet meeting, to which Zafar had responded in the negative.

"None of the cabinet meetings were held on the matter," Barrister Zafar said.

"This was history's most important matter; can the cabinet discuss it without it being an agenda item?" the bench had asked.

In an earlier hearing on Musharraf's plea, Additional Attorney General (AAG) Ishtiaq A Khan on Thursday told the bench that the formation of the special trial court had not been approved by the federal cabinet.