lifting of the countrywide lockdown in phases: Imran Khan 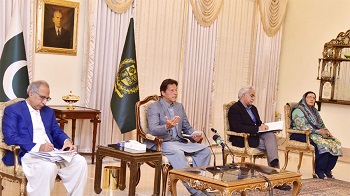 ISLAMABAD: Prime Minister Imran Khan on Thursday announced lifting of the countrywide lockdown in phases from Saturday by reopening all construction-related industries and shopping centres for five days a week from Fajr [early morning] till 5pm and outpatient departments (OPDs) in hospitals.

The decision came on a day when Pakistan reported nearly 1,300 cases of Covid-19 and 48 deaths in 24 hours.

The prime minister announced the decision after a meeting of the National Coordination Committee (NCC) also attended by chief ministers of the four provinces.

As there was no consensus between the Centre and the provinces on restoration of public transport and rail and local fights services, these would remain suspended till further decision.

The Centre also urged the provinces to allow overseas Pakistanis coming from different countries to observe self-quarantine as the government has no such facility to accommodate 125,000 expatriates who wanted to return to the homeland. However, this proposal was also rejected by the provinces fearing it would cause the further spread of the deadly coronavirus.

“We are lifting lockdown in phases from Saturday because people like rickshaw and taxi drivers and [those from] working class are in trouble,” Mr Khan said at a press briefing after the NCC meeting. He said the decision to lift the lockdown was made in consensus with the governments of four provinces and Azad Jammu and Kashmir and Gilgit-Baltistan.

On the occasion, Minister for Industries Hammad Azhar listed the industries, businesses and shops reopening from Saturday. These include steel and aluminium mills, paint manufacturing units, ceramics, tiles, pipe factories, electrical cables factories and hardware stores. He said all small markets in residential localities will also remain open five days in a week till 5pm.

Highlighting details of the NCC meeting, Minister for Planning and Development Asad Umar said six major decisions were taken unanimously: lockdown will be lifted in phases from Saturday; small markets will remain open from Fajr [early morning] to 5pm and no shop will be allowed to open in the night, except medical stores; markets and shops will remain closed for two days in a week so that the personnel of security agencies like police and Rangers deployed to ensure closure of shops at 5pm could take some rest; OPDs in hospitals will also be reopened so that patients of other diseases could get medical treatment; and schools will remain closed till July 15.

PM Khan said the government with limited resources had to keep a balance between preventive measures to curb the spread of coronavirus and running the country’s economy by reopening businesses and industries. However, he urged people to follow standard operating procedures (SOPs) devised by the government for different sectors as Covid-19 was still on the rise in the country and there was a global fear that a second wave of the viral disease could hit the world again.

“I have tasked Tiger Force volunteers with creating awareness among people about Covid-19 preventive measures. Now it depends on people’s cooperation that how much we will succeed in the next phase,” he added.

The prime minister said that in case of a new spike in Covid-19 cases, the government would have no option but to impose another lockdown across the country. He said the government had given the biggest relief package in the country’s history to help the poor and daily wage earners who were the worst-affected segments of society due to the pandemic and reduced the prices of petroleum products that were lower than any other country in the region.

“The country’s economy has been hit hard as we are expecting 35 per cent less tax collection this year as compared to the targeted revenue and exports have also declined,” he added. Many small enterprises, he said, were on the verge of closure due to lockdown restrictions, adding that the government was also receiving requests from owners of restaurants for reopening of their business.

Talking about overseas Pakistanis who wanted to return to the country, the prime minister said that due to limited quarantine facilities, which only cater for 7,500 returnees, the government wanted to allow them for self-quarantine at their homes. “But in that case it will be the responsibility of coming passengers as to how they will keep their other family members, specially aged people, away from the disease,” he added.

However, he said, the provinces had some reservations over the self-quarantine option and, therefore, the government could not bring all 125,000 overseas Pakistanis back to the country who were willing to come.

He said the nation was passing through a difficult phase but it had to be thankful to Allah Almighty that the intensity of Covid-19 in Pakistan was low as compared to the United States and European countries.

Prime Minister Khan thanked his Special Assistant on Social Welfare Dr Sania Nishtar for launching the Rs144 billion Ehsaas cash distribution programme for 12 million poor families under which more than Rs82bn had so far been disbursed.

About opening of OPDs in hospitals, the prime minister said the since all concentrations were focused on coronavirus-related matters, patients of other diseases like tuberculosis and cancer were being ignored.

Special Assistant to the PM on National Security Moeed Yousuf said that over 110,000 overseas Pakistanis have got themselves registered to return back to the country. He said 20,000 of them had already returned and 7,500 more were coming next week in 32 different flights. He urged the provincial governments to review their decision regarding the option of self-quarantine for the returnees. Otherwise, he added, not more than 7,500 Pakistanis would be coming in a week due to limited official quarantine facilities. “The ratio of positive Covid-19 patients coming from abroad is similar to the local number of patients,” he said.