Lock down can become depressing,wants some cricket activities: Misbah-ul-Haq 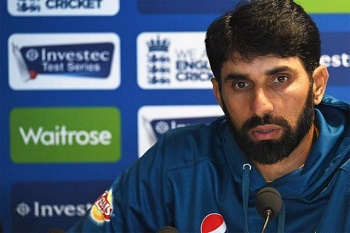 LAHORE: Pakistan head coach and chief selector Misbah-ul-Haq says being confined to home due to the coronavirus-forced lockdown can become depressing and wants some cricket activities to resume soon even if the matches have to take place behind closed doors with proper safety barriers.

There are reports that the England and Wales Cricket Board (ECB) was contemplating rescheduling and organising the three Test matches against Pakistan in August behind closed doors at Old Trafford, Manchester and Southampton.

Misbah said he would love to see some cricket activities resume at the international level, and has no problems in playing in empty stadiums.

“It is not an ideal situation for anyone because of this coronavirus pandemic and obviously the health and well being of everyone should be our top priority. But if matches can be held even in empty stadiums with the right safety barriers...I would have no problems,” Misbah was quoted as saying in a Press Trust of India report that appeared on The New Indian Express website on Friday.

The former Pakistan skipper said that the players have had nothing much to do except stay indoors for the last two months since the Pakistan Super League (PSL) was called off due to the global health crisis in March.

“Everyone is confined and I just think that if even if it can be made possible to bring some live cricket action to people sitting at home it would do them a lot of good,” Misbah said.

“It becomes depressing when you have nothing to do and hear about mostly Covid-19 news all the time. In this situation if sports can be resumed and if cricket can be started at least it will allow the people to watch cricket at home.”

Misbah, who took charge last year in September, said if the right safety barriers and precautions are put in place for players, match officials and other stake holders, cricket boards can move forward.

He, however, reminded that boards will have to follow their government instructions on the coronavirus.

German football league Bundesliga is set to resume on May 16 and Misbah said it was a positive development.

“But even they first got clearance from their government. Cricket boards also will have to do that,” he insisted.

The 45-year-old said the players were responsible for maintaining fitness standards during these testing times and he expects them to be in top condition whenever cricket resumes.

“I told them as cricket professionals it is their individual responsibility to take care of themselves and their fitness. Because they can be called on duty anytime,” he said.