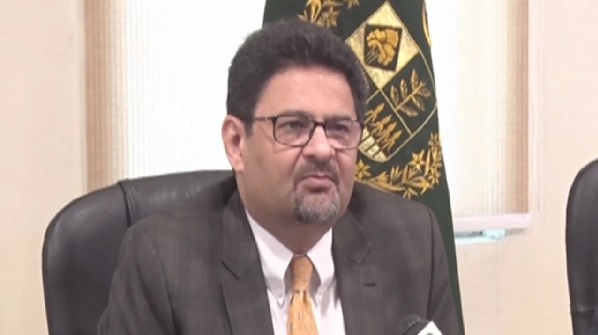 ISLAMABAD: Finance Minister Miftah Ismail on Thursday expressed the government’s inability to provide any relief to the middle class in next year’s budget rolling out on Friday (today) that would instead lay the foundations of economic stability through “growth with responsibility and sustainability”.

At the launch of the Pakistan Economic Survey 2021-22, the finance minister and accompanying ministers for planning and power Ahsan Iqbal and Khurram Dastgir Khan spoke little about the otherwise broad-based economic growth of 5.97 per cent supported by buoyant agriculture, industry and service sectors during the current fiscal year.

Instead, they focused their discourse on alleged devastation left behind by the PTI government in the form of a balance-of-payments crisis, and a ruined energy sector.

The finance minister said talks with the International Monetary Fund (IMF) were in progress and would move towards a staff-level agreement after the federal budget was presented because that would contain the required reforms for their satisfaction.

He did not directly respond to a question if the multilateral lender had stopped funding to Chinese power producers, but said nobody could stop fuel payments, otherwise the plants would come to a standstill.

The government would increase salaries and pensions of all with equity in the budget to compensate for 12-15pc rate of inflation, Mr Ismail said. The consolidated budget deficit was estimated to be Rs5.1 trillion this year, one of the highest ever because of the previous government’s negligence and mismanagement, he said, adding that the coming budget would address tax distortions and exemptions to provide a level playing field to all.

The key takeaway of Mr Ismail’s media engagement was that the coming budget was being presented at unusual times and there were at least three areas of major economic challenges that emerged because of “four years of incompetence and mismanagement” of the PTI rule that led the economy into a tailspin. Besides, the previous government didn’t complete projects on time, which resulted in widespread loadshedding, he said.

He said PTI chairman Imran Khan laid landmines, not only for the PML-N and allied parties but for the people and the state of Pakistan and the biggest among them was energy subsidies introduced at the last leg of his government.

On top of this were the unfavourable and challenging international economic conditions where commodity prices skyrocketed. He said the government did not have any immediate solution to global inflation amid Brent crude oil at $123 a barrel and rising. Besides, wheat had to be purchased at over $500 a tonne. “I cannot control this but cannot leave people without food and fuel, either” unless exports grow and provide some relief over time, he said.

The finance minister said major challenges to the economy had been addressed through two recent fuel price adjustments to reduce subsidies, but the “budget will be tough” because the government would go for “fiscal consolidation and expenditure cuts” with associated problems to the people. He said the focus would be to achieve sustainable growth by reviving the industry and increasing exports.

The minister said every attempt in the budget would be towards increasing direct taxation but made it clear that in given circumstances, the government would not be in a position to provide relief to the middle class as it provided to those earning less than Rs40,000 per month on fuel prices.

He said the imports reached the highest ever imports of $76-77bn, which was also the highest ever even as a percentage of GDP and 48pc annual increase, thus leaving a trade deficit of a record about $45bn.

He said the country’s exports used to be half of the imports until a couple of years ago, but this time they dropped to 40pc of imports. “To finance the remaining 60pc, you have to depend on either remittances or loans,” he said, adding that the Imran Khan’s government had resultantly caught the country into a debt trap instead of securing commodities at historically low prices.

“The moment they looked towards growth, they created a balance-of-payments crisis and foreign exchange reserves dropped by $5.6bn to below $10bn since March,” he said and hoped the reserves would get back to over $12bn within two days after $2.4bn receipts from China.

The finance minister said it was no less than a tragedy that the former prime minister reduced and then froze petroleum prices lower than the purchasing cost knowing well that he would not be there when blank cheques he was signing would reach the treasury for cash.

“This forced us to take tough decisions to avoid imminent default and now we are on a path to stability. We will achieve stability and growth with responsibility, sustainability and inclusiveness in a manner that there is no more balance-of-payments crisis in future,” he said.

He said that in a departure from the past when all incentives and facilities were extended to the influential and powerful for economic progress, the strategy would now be to increase the income and purchasing power of the poor and the middle class because the consumption pattern of the upper class consumed more imports and resultant foreign exchange.

The minister sidestepped a question on a mayday scenario being portrayed by the cabinet members while discrediting the previous government leading to opening letters of credit for oil imports, negative credit rating and negative market sentiment, saying they did not want to but had to put the record straight.

The minister said all macroeconomic indicators, such as tax- and debt-to-GDP ratios, inflation, agriculture output, foreign investment and employment, deteriorated over the past four years. At the same time, the previous government also missed lifetime opportunities as over $5bn in foreign inflows in the shape of $4bn from G-20 debt relief and $1.4bn from IMF without any strings attached could not be put to productive use and were instead diverted to construction and real estate.