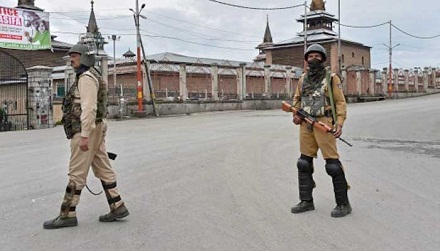 NEW DELHI: Mirwaiz Umar Farooq said abrogation of Article 370 and Article 35A had complicated the Kashmir issue, opened new regions of strife and led to a military standoff on the border with China, he was speaking on the second anniversary of India’s smash and grab of the occupied and erstwhile state of Jammu and Kashmir on Thursday.

“On the completion of two years of abrogation of Article 370 and Article 35A of India’s own constitution, and break-up of J&K into two union territories, in an attempt to erase its status as a disputed territory, the All Parties’ Hurriyat Conference (APHC) reiterates its strong resentment and opposition to these unilateral and arbitrary actions,” the Mirwaiz said in a statement.

The Indian government offered a rosy picture of its assumption of power in the disputed region. “The people of the state have got the wings to fly and, in the years to come, J&K will make even greater contributions to India’s growth and development,” said Jitendra Singh, minister of state in the Prime Minister’s Office.

The narrative was at variance for others. “APHC on this occasion would also like to draw attention of the citizens of India, and the world at large, that the present Indian government’s actions of August 5, 2019, have only complicated the dispute further, over the state of J&K. This is illustrated by the fact that it ignited the flames along the Line of Actual Control (with China) even as some measure of calm has been introduced along the Line of Control,” the Mirwaiz said.

“It is worth pointing out that whereas before August 2019 New Delhi would argue that Kashmir was the main trouble spot in the state, today it is faced with four trouble spots of Leh, Kargil and Jammu as there is disaffection in these regions too.”

The Hurriyat statement slammed New Delhi’s policy of brazen repression in the occupied valley. “The government continues to assault the people of the state by continuing to incarcerate political prisoners and youth, intimidate people by arrests and bringing in arbitrary and anti-people laws, media gags, arbitrary dismissal of locals from government service, gagging all voices of dissent and continued misrepresentation of the actual conditions in the (former) state.”

The Mirwaiz said New Delhi must accept the need to address the Kashmir dispute, engage with those who truly represent the political will and aspirations of its peoples, and defuse the building geopolitical pressures in the region along its northern and western borders. “APHC urges the government of India to resume engagement with the government of Pakistan,” the Hurriyat leader said.

He said APHC has had a long-standing policy of engagement in meaningful dialogue among all the stakeholders that sees the situation on the ground for what it is, and encourages dialogue rather than armed confrontation.

“The latter (Indian policy) benefits no one and harms everyone,” the statement said. “Nor is intransigence and denial a helpful stance. All political prisoners, including APHC chairman Mirwaiz Umar Farooq, hundreds of youth and all others arrested arbitrarily or under draconian laws should be released by the government.”

The APHC said the ordinary people could not match the muscle of status quo powers, but “our political education in the last 30 years has been significant and we appreciate all platforms that give us a voice. These platforms must be created and we should be allowed to participate in them — not only to allow our voice as people’s representatives to be heard, but because it is just. “It is time that the conflict over the state of J&K is resolved so that not just Kashmir, but all of South Asia can look forward to living up to its collective potential.”

Ahead of the day, Indian forces erected numerous new checkpoints and barricades across Srinagar, with personnel in bulletproof gear checking vehicles and frisking residents. Suspected fighters fired shots in the air in the heart of Srinagar’s old quarter where a low-intensity explosive device also went off. In the Sopore area, some fighters fired at police personnel as authorities tried to force shopkeepers observing the shutdown to open their doors.

Veteran leader Syed Ali Geelani, 90, had called for a general strike to mark the “black day” in protest against “India’s naked aggression” of August 2019. The call was supported by several groups who also challenge India’s rule over Kashmir.