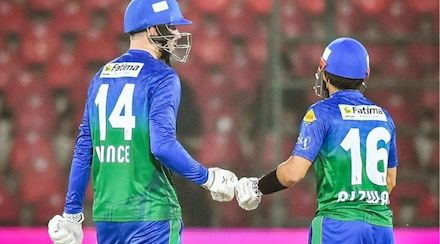 KARACHI: Multan Sultans stayed firmly on course for the HBL Pakistan Super League 6 playoffs in Abu Dhabi after cruising past Peshawar Zalmi by eight wickets at the Sheikh Zayed Stadium on Sunday.

Rizwan led from the front as Multan chased down a target of 167 to chalk up their second straight success of the second leg — the third in seven games — as the opener sparkled with an undefeated 82.

The result virtually sealed the fate of bottom-placed Quetta Gladiators in the race for the next phase while confirming Islamabad United and Lahore Qalandars as the first teams to qualify.

Peshawar paid dearly for being off line with the new ball, and nobody set a worse example than Wahab Riaz. The skipper not only bowled a couple of wides but also leaked 15 runs in the first over.

The heavy dew in the late hours of the evening helped Multan score freely as bowlers struggled to grip the ball.

After Shan Masood fell in the fourth over, Rizwan, who slammed nine boundaries and a brace of sixes including the winning runs during his 56-ball stay, and Sohaib Maqsood (61 off 31 balls, five sixes and four fours) shared a second-wicket partnership of 116 from 76 deliveries.

Sohaib mainly dealt in sixes and a particular liking for the slow left-arm bowling of Fabien Allen, clouting the West Indies international thrice into the stand. Rizwan was brilliant in rotating the strike and serenely surpassed 400 runs in the ongoing edition when he reached 74.

Earlier in the piece, the star with the ball was Dhani after Rizwan chose to bowl first. Born in Larkana, the 22-year-old has been a genuine source of inspiration for Multan Sultans and continued his progress into a serious contender for a place in any side in topflight cricket — since he surfaced during the last domestic season by grabbing a career-best 4-31, while ensuring Multan top both batting and bowling charts.

The lanky right-armer dented Peshawar Zalmi’s hopes of building on the excellent first-wicket partnership of 71 in the opening eight and a half overs by striking twice in each of his first two overs.

Kamran Akmal slapped a catch straight down the throat of Imran Tahir down at third man after making 35 off 27 deliveries (five boundaries). Shoaib Malik’s tentative push to the very next delivery was easily poached by Rizwan.

After failing to make much impact in the last two games, Haider Ali seemed like rediscovering his form, However, the youngster unwisely attempted to clear the infield, but lack of elevation brought his downfall for a 30-ball 28. Rovman Powell came and went in the same over, undone by the speed Dhani generated from the slow surface.

David Miller’s fleeting stint in the PSL — since he is needed by South Africa for their Twenty20 International series in the West Indies — was then ended by a spectacular dismissal by Rizwan, who scampered back and then changed direction to catch the ball with stretched gloves. The left-handed made 22 to leave Peshawar in some strife at 117-5 in the 16th over.

Sherfane Rutherford, still trying to find his way in the T20 format, accelerated when it mattered, guiding his team to 166-7. The 22-year-old left-hander was brilliant at backend of the innings by cutting loose to smash four sixes and two fours in a 40-ball 56, which was his second half century at this level in 56 games.